Mayo Clinic goes on low-salt diet — for roads and sidewalks 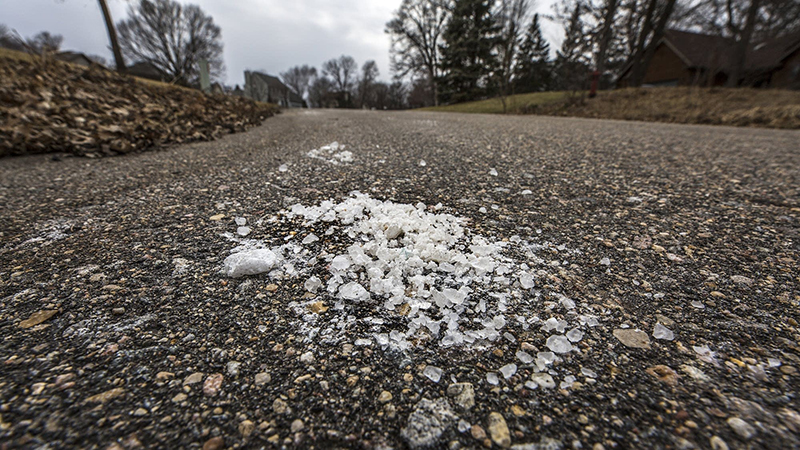 Every day, thousands of patients from around the world come to Mayo Clinic in Rochester seeking medical care, so it’s no place for dangerously icy sidewalks or parking lots.

Yet despite last winter being one of the snowiest on record, Mayo reduced its salt use by 60% from the previous winter.

When Nick Queensland became Mayo Clinic’s ground maintenance supervisor about three years ago, he started looking at how to cut back on salt but still maintain a safe campus.

“We have people from all over the world visiting our campus every day and some of the best physicians in the entire world,” he said. “I can’t have people getting hurt, regardless. We still have to be open every day and ready for patients.”

Yet concern over the environmental impact of road salt washing into lakes, streams and groundwater is on the rise. Excess chloride is toxic to fish and aquatic life, corrodes bridges and infrastructure and can affect the taste of drinking water.

About 50 Minnesota water bodies are listed as impaired due to chloride levels that exceed state water quality standards.

Queensland said Mayo started small, experimenting with using less salt in areas without much traffic. A turning point came when he heard about “Smart Salting” training offered by the Minnesota Pollution Control Agency and Fortin Consulting.

“It energized my whole team,” he said. “It kind of got us all on the same page, with a common goal.”

Mayo’s crews and contractors now only use salt when and where it’s needed, instead of just routinely plowing and salting after every snowfall. The contractors use calibrated spreading machines so they can adjust the amount of salt they’re distributing.

“We assumed that they knew how much salt they were putting down, and it turned out they didn’t,” Queensland said. “Nobody did. It was put salt in the spreader, set the dial and go.”

Crews also started spraying a liquid saltwater brine when possible to cut back on rock salt.

“My goal every day at Mayo Clinic, is to have a safe surface, and that does involve applying some salt,” Queensland said. “But the key is to apply the right amount of salt where it’s needed and when it’s needed.”

Mayo Clinic maintains a huge area in Rochester that stretches over 10 square miles, including 15 miles of sidewalks and 120 acres of parking lots and roads.

Queensland wouldn’t say exactly how much cost savings the salt reduction has meant for Mayo, but he did say it has been significant. The reaction has been mostly positive, he said, and Mayo’s leaders supported the effort.

“It was a big change,” he said. “We knew the parking lots weren’t going to look like they used to look. They were always black, sometimes white with salt. And occasionally, they were going to have a little snow on them using this method.”

Queensland said while Mayo crews keep the campus safe and accessible, it’s unreasonable to expect that in a blizzard, the clinic’s parking lots will be completely snow-free.

He encourages people to plan ahead for winter weather and wear boots or appropriate footwear for the conditions.

Mayo Clinic isn’t the only large health provider to reduce its salt use. Park Nicollet Health Services has made a similar effort, said Brooke Asleson, a water pollution prevention specialist with the MPCA.

The MPCA has offered about a dozen smart salting training sessions for property managers, including one last week in Duluth.

Asleson said the sessions have drawn people in charge of grounds maintenance for schools, apartment buildings, commercial businesses and shopping malls. The sessions cover the environmental effects of salt and how to use it more effectively.

“We’re really there to just remind them that there are a lot of tools out there for managing snow and ice, and that salt is just one of many — and that there is a time and place for it,” she said. “But there is a lot of times where we’re using salt and it’s not the appropriate tool.”

That includes using granular salt before a snowfall, or when temperatures are too cold for the salt to melt ice effectively, she said.

Asleson said there’s a lot of overuse of road salt in the commercial sector, perhaps because of a lack of information, or an assumption that excessive salting is necessary to keep people safe. She said most property managers are excited when they learn that they can make small changes that result in big reductions in salt use without compromising safety.

“We have to inspire them to want change, because it’s not required,” Asleson said. “It’s really a benefit to them to do this. And that’s what we’re here to convince them, is that this is not just good for Minnesota’s environment, but this is good for your business, your company, your bottom line and … reducing your own risks as far as liability concerns.”

Asleson said the public also should accept some responsibility for winter safety, including wearing appropriate footwear and watching out for slippery spots.

“There’s going to be some conditions that we and nobody else can prevent,” Asleson said. “That’s just winter in Minnesota.”