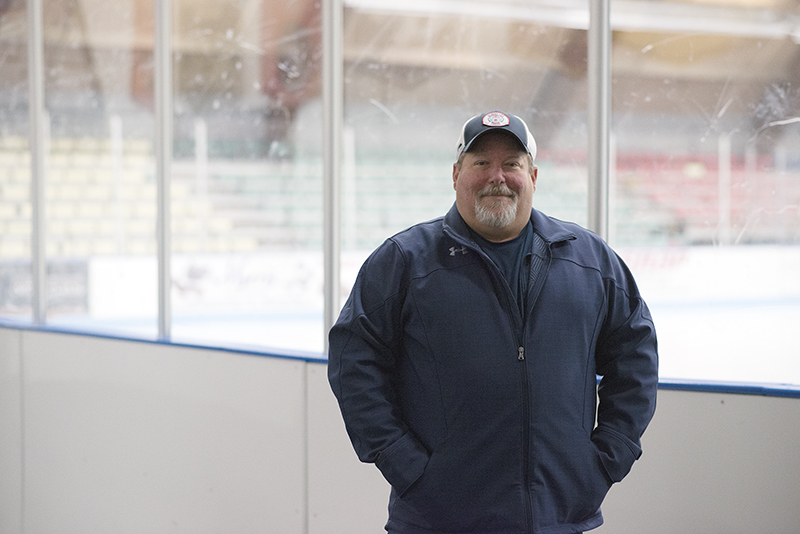 Mark Goskeson will take over as head coach of the Albert Lea girls’ hockey team. Despite starting his first attempt at the varsity level, Goskeson has 24 years of experience coaching association hockey. - Tyler Julson/Albert Lea Tribune

Goskeson heard about the job opening up when previous head coach Josh Funk accepted a volunteer assistant coaching position with Robert Morris University in Pennsylvania. Goskeson jumped at the opportunity to coach the varsity girls’ team.

“I’m here for the girls,” Goskeson said. “I love the game of hockey and enjoy making a difference in people’s lives.”

Growing up in Albert Lea, Goskeson has been a lifelong hockey fan. He has 24 years of coaching experience, coaching at all the different levels in association hockey. Goskeson’s wife, Kelly, is also a member of the Albert Lea Hockey Association Board. His daughters Morgan and Marlee are players in the association hockey league as well.

Goskeson described his coaching style as personable and a guider of players along their hockey careers.

The past two seasons have each yielded six regular season wins, with one section playoff victory last year. Goskeson hopes to double the team’s wins this year and has set the team goal at 12 wins.

He admits it’s a lofty goal, but only losing one senior from last season means a multitude of returning on-ice experience to this year’s squad, Goskeson said. This year’s team will have seven seniors and five juniors who all played a role on last season’s team.

Goskeson said he is excited to get the season started and praised the work ethic and chemistry he has seen from the girls already.

“I have a great group of girls that work hard and support each other on and off the ice,” he said.

The Tigers had their first chance to earn a win Thursday night with their first regular season game in Faribault. Look to Saturday’s edition of the Tribune for full results from the game.