Funeral services for Norman Davis, 89, of Northwood will be at 11 a.m. Friday at Deer Creek Valley Lutheran Church in rural Glenville. The Rev. Josh Blair will officiate. Interment will be at London Deer Creek. Visitation will be from 5 to 7 p.m. Thursday at Schroeder & Sites Funeral Home in Northwood and one hour prior to the service at the church. 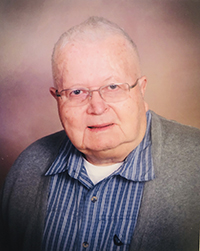 Norman Franz Davis was born Dec. 23, 1929, on his parents’ farm in London Township in Freeborn County. He was the only child of Jason and Anna (Holmes) Davis. Even though he was only a child, he grew up side-by-side with many first cousins who were close to him throughout his life.

Norman was baptized and confirmed at Deer Creek Valley Lutheran Church. He was a lifelong member there and was very active. He served on the church board and played on the church softball teams and dart league. He completed many construction projects for his church, as well.

Norman was the epitome of a kind and gentle soul. He worked hard his whole life — first as a farmer and later as a contractor. He built and remodeled many homes in Northwood and its surrounding areas. He was known for his honesty and integrity.

On June 20, 1948, Norman married Margie Frances Bratrud in Northwood. They met in high school, where Norman played football, baseball and basketball. They married shortly after Norman graduated and lived on his parents’ farm, where they built a new home in which to raise their family.

Norman loved hunting and went to northern Minnesota for many years to hunt with his uncles. He also enjoyed attending all of the athletic events for his children and grandchildren.

They moved to an acreage on the state line in 1982 when their son, Gene, took over the family farm.

In 1986, Norman fell at a construction site and received a severe head injury. He was given little chance of survival, but overcame great odds to fully recover and continue in all of his work and life activities.

In 2006, the couple moved to Northwood. Norman and Margie were married for 71 years.

Norman loved to play cards throughout his life and enjoyed watching western movies.

His children, grandchildren and great-grandchildren were a source of great pride and joy. The legacy of his kind and gentle spirit and his faith will live on through them.

Preceding him in death were his parents Jason and Anna; one grandson, Adam Davis; and one great-granddaughter, Rae Ann Davis.

Despite Alzheimer’s robbing him of his memory in his later years, Norman didn’t falter in displaying his calm and thoughtful spirit to his many friends and family.

In lieu of flowers, memorials are requested to the London Deer Creek Cemetery Association.

Schroeder & Sites Funeral Home of Northwood is in charge of the arrangements.