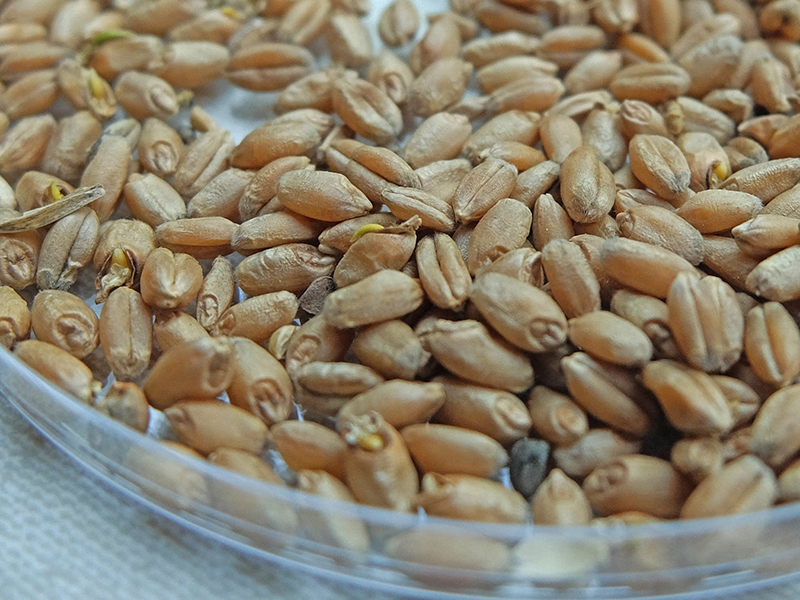 It’s been a tough year for farmers across the region: A wet spring delayed planting and a wet fall kept farmers from harvesting some crops like sugarbeets and potatoes.

Many farmers who grow wheat thought that might be the one crop to turn a profit this year. It had all the markings of the kind of harvest they’d hoped for, with good yields and high protein levels. But when they hauled the crop to sell it at elevators around the state, instead of big payouts, they were hit with deep per-bushel price reductions.

Betsy Jensen, a farmer from Stephen in northwest Minnesota’s Marshall County, was among them. She sold a truckload of wheat to the elevator shortly after harvest.

The culprit? A quality issue called “falling numbers.” It’s affecting farmers from Minnesota to Montana — the hard red spring wheat belt of the United States —  “and it’s nothing that we have control over,” said Jensen.

Falling numbers happens to some of the wheat crop most years — but this year, the phenomenon has been ubiquitous. And it comes at a time when farmers in northwest Minnesota are already dealing with the results of late planting, short growing seasons, muddy fields and a near-constant barrage of challenges all year, in everything from corn to soybeans to sugarbeets to sunflowers. The wheat crop was the one bright spot this harvest season.

And then: Falling numbers.

“Falling numbers is an issue once every 15 years,” Jensen said. It can be the difference between profit and loss on a bushel of wheat.

“And so, sure enough,” she sighed, “THIS year we have falling number problems.”

That problem comes down to starch and sugar and bread.

“Go get a loaf of bread, and if you ever find a hole in it, that’s from falling number problems,” Jensen explained.

Here’s how it happened: Weather conditions late in the summer were so consistently cool and damp that the wheat started to germinate, or sprout, before it was harvested. When that happens, the starch in the kernels turns into sugar. That’s a problem because starch is critical for quality bread flour.

“When that seed germinates, what’s happening is the starch is being broken down as food for the growing plant. That starch being intact is what we rely on for use in the bread, but the seed is actually trying to use that for the growing plant,” explained Andrew Green, who leads the spring wheat breeding program at North Dakota State University.

On the university’s Fargo campus, an entire research lab is dedicated to understanding the quality of wheat from field to flour to bread. The wheat quality lab is also the place where researchers test milled grains for falling numbers.

To assess a batch, research specialist DeLane Olsen mixes flour and water in test tubes. A machine shakes the tubes to create a gravy-like slurry, then they’re placed in a hot water bath while another machine stirs the mixture with pencil-sized steel rods.

“As soon as that starch hits the hot water, it will gelatinize,” Olsen said. “For a certain amount of time as it’s sitting there, it can actually hold that stir rod up. So we’re measuring how long it takes that stir rod to fall through that gelatinized starch.”

Falling numbers is a simple measurement of how long it takes the steel rod to fall to the bottom of the test tube that holds the wheat flour slurry. Flour millers want that time to be 275 to 300 seconds — or higher. Anything less means they’ll have flour of unpredictable consistency, which is what leads to those holes in a loaf of bread. And for commercial bakeries, especially, consistency and predictability are key.

“Something like this that can just completely wreck the quality of the bread that they’re trying to produce in large quantities is a huge risk,” said Green.

“When you have (a) low falling number, that dough tends to be a lot stickier, and in our mechanized process of baking bread it will not work — it will not go through those machines,” said Olsen.

Just ahead of this year’s harvest, many farmers sold the good-quality 2018 wheat they’d been holding in storage to make room for what they thought would be a high-quality 2019 crop, said Jim Peterson, the policy and marketing director for the North Dakota Wheat Commission.

Thanks to falling numbers, not all the wheat that’s been harvested this year will be ground into flour. Some can only be sold for livestock feed, at a price well below what it cost to grow the crop. And many overseas customers are still processing the 2018 crop, which means the effects of a poor-quality 2019 harvest might not affect the market for a few months.

Peterson just returned from Europe, where he said export customers had a lot of questions about this year’s wheat quality.

“They still want a 275-second falling number, so if it’s 250, no matter how low the price gets, there’s a lot of customers that are going to be hesitant to take that overseas,” he said.

That’s because those overseas markets often mix hard red spring wheat from the U.S. with domestic wheat of lower quality. So they depend on — and are willing to pay for — high-quality U.S. grain.

So far, export prices have not increased significantly, despite the fact that there is less high-quality spring wheat coming from U.S. producers.

“The market is in a little bit of a stalemate right now, trying to figure out how to handle this,” said Peterson. He said he thinks it’s possible the price of high-quality wheat could rise early next year, because Canada — a major competitor for U.S. spring wheat growers — has also had harvest quality problems. If that happens, it would be an economic boost for farmers who stored good quality wheat from this year’s harvest.

The Minnesota Association of Wheat Growers estimates half this year’s crop is affected to some degree by falling numbers, which has slashed the prices farmers had been expecting to be paid by anywhere from 25 cents to $2 a bushel, said executive director Charlie Vogel. By the truckload, that could add up to thousands of dollars in loss for a farmer.

“In the international markets, there probably will not be long-term impacts, (but) just because of the severity of the harvest problems, there’s going to be some long-term financial impacts to individual growers and communities,” said Vogel.  Many farmers were expecting wheat to provide income in a year when most other crops were damaged by weather, or prices are too low to be profitable.

Vogel worries that the full impact of falling numbers in this year’s wheat harvest won’t be known until farmers start selling the portion of this year’s crop that they’ve already put in storage, hoping for higher prices early next year.

Bins of wheat they might think contain high-quality grain could be contaminated by wheat with low falling numbers.

“I foresee some frustration on just getting a uniform number,” he said. “It’s going to make it difficult to figure out the full extent of this issue until all of (the crop) is hauled in.”