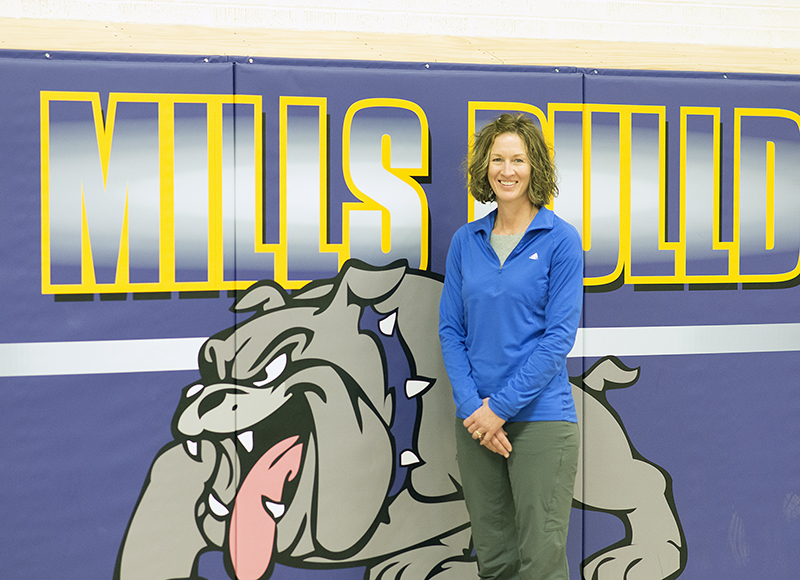 LAKE MILLS — After starting her volleyball coaching career with the Lake Mills team in 1992, Angie Boehmer has spent years coaching the sport she loves and creating lasting relationships with her players. This fall, her dedication was recognized, earning her the 2019 Iowa Girls Coaches Association’s Assistant Coach of the Year Award.

While Boehmer said it was a big honor to receive the award, she was quick to give credit to the program around her.

“You don’t get these types of honors unless your program is good,” Boehmer said. “It was just being part of a great program. As with anything else, the relationships with the girls is what’s great.”

Boehmer was awarded with a commemorative plaque at the IGCA Senior Volleyball All-Star game on Saturday in Carroll, Iowa.

Boehmer started coaching with her husband, Jim, in 1992, where she helped with the varsity program and was the coach of the spring league middle school team. She held the position for 15 years before taking some time off to raise her children. She returned to the sport after eight years when she accepted the middle school coaching position, thinking it was just going to be a one-year commitment.

“Our program and its success can be traced to the work that Angie has put into the program as a middle school and assistant high school coach,” Jim Boehmer said. “She has helped take our program to the state tournament, including a trip to the state finals. I can promise you that her efforts have been critical to the success of our program.”

As a fifth-grade teacher at the Lake Mills elementary school, Angie Boehmer has the unique opportunity to teach her players a couple years before coaching them on the volleyball team.

“Almost always, I’ve had them and taught them in fifth grade,” Angie Boehmer said. “It’s fun to see when they come into their eighth grade year and just seeing how much they’ve personally changed, that’s pretty cool. And to see their growth, even within one season, just means a lot.”

While coaching does not come without its sacrifices, Angie Boehmer said it was worth it for all of the positive relationships she has formed with her players throughout the years. She said even players who have moved on to the varsity program will come down to her room and check in with her throughout the day and leave messages on her board if she’s not there. She talked about the most rewarding aspect of coaching.

“It’s the relationships,” Boehmer said. “We have an A team and a B team, but one of my goals has been to show the girls that not one of those is more important than the other. Our A team doesn’t get better unless our B team plays against them. It’s just those relationships with the girls and making them realize they’re all an important part no matter where they’re playing.”

Boehmer will retire from coaching at the end of the school year, but said she will still be attending Bulldogs sporting events regularly. She also plans to spend a lot of time watching her youngest son, Cael, play baseball for Wartburg University.

Interesting fact: Boehmer received her award at the IGCA Senior Volleyball All-Star game, where she also played as a senior from Osage High School 30 years prior