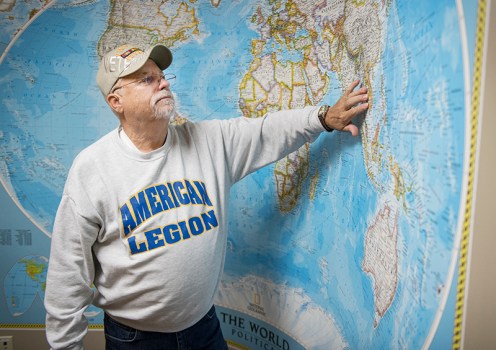 Steve Sorensen points out on a map at the Tribune where he served in Vietnam and where he stopped along the way there. - Colleen Harrison/Albert Lea Tribune 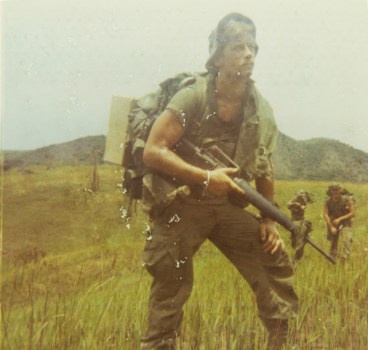 Army veteran Steve Sorensen is pictured around July 1970 during his time serving in Vietnam. - Provided 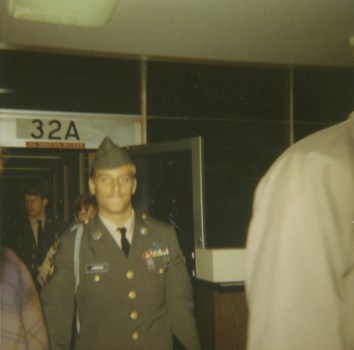 Steve Sorensen is pictured arriving at the Minneapolis airport in October 1970 after finishing his tour in Vietnam. - Provided 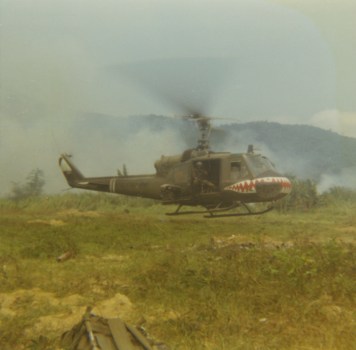 Pictured is what Sorensen called a gun ship, with teeth painted on to make it look more menacing, he said. He and his unit would use it to patrol at times. - Provided

At 19 years old, life was pretty simple in 1969 for Steve Sorensen. He lived in Alden, where he grew up, and worked at Streater as a forklift operator.

Then he was drafted.

Sorensen, now 70, said he didn’t care for the news initially, as he knew his service during the Vietnam War would take him away from home for awhile, but over time he said he adapted.

Sorensen left two weeks after finding out he had been drafted for Fort Lewis, Washington, where he went through basic training for nine weeks. He then returned home for two weeks, before going back to Washington for nine more weeks of advanced individual training, or combat training. After another two weeks home, he left for Vietnam out of Fort Lewis, stopping in Hawaii and Guam along the way. He remembered taking an 18-hour commercial flight to Vietnam full of GIs, and sitting in the back of the plane with one of his friends — who ultimately would not return home.

Once in Vietnam, Sorensen underwent two more weeks of training before joining his Army unit. It was the training in Vietnam that prepared him the most for his service, Sorensen said, as they used mock villages and other setups and learned how to find mines.

He was generally based out of Chulia, Vietnam, but Sorensen said the area his unit covered was vast and consisted of all different types of terrain — “from rice paddies to the mountains” in the central highlands inland from the ocean, he said.

His unit patrolled different areas, and one week a month were stationed at San Juan Hill Fire Base. Sorensen said other than being at the base, they were always on the move patrolling for the North Vietnamese Army/People’s Army of Vietnam or the Vietcong. His unit was meant to track their movements, looking for campsites and trying to figure out what weapons they had at their disposal. They also captured those they came across from either movement.

Sorensen said he adjusted and adapted quickly to what became everyday life while serving.

At night, he said he learned to listen for abnormal sounds, such as metal clicks from enemy weapons being loaded.

While serving, letters and care packages from home kept his spirits up, Sorensen said. He would also take pictures during his service and send the rolls of film home to his mother, who would have them developed and then put the pictures into a book for him.

Sorensen was injured by grenade shrapnel at one point during his service, earning him a Purple Heart. The injury didn’t impede his patrol duties, though, as he said it lined up with his unit’s rotation at the fire base and he was able to rest up during that week before going back out on patrol with everyone else.

During war time, there were lighter moments that stay with Sorensen. He said there was a time where the unit had no food coming in, and had to live off what they could find. Sorensen happened to find a package of smoked oysters at the bottom of his rucksack that he ended up sharing with his squad leader — a Philadelphia Eagles fan. They now have “the Oyster Bowl” each year the Vikings and Eagles play each other, where the losing team’s fan sends the victorious fan smoked oysters through the mail.

Sorensen made some lifelong friends during his service time who he gradually lost touch with, until someone worked to track down everyone’s contact info to reunite the unit. They now get together each year to march in a Veterans Day parade in Las Vegas.

“They started off from where they left off,” said Sorensen’s wife, Candace, of the men reuniting.

Sorensen would end up serving in Vietnam for exactly one year — from Oct. 1, 1969, to Oct. 1, 1970. He was still patrolling up until about one week before starting his journey back to the United States. Once back in the U.S. he was home on leave for one month, before finishing his remaining six months of service at Fort Knox, Kentucky. Sorensen said he could’ve stayed in Vietnam for 20 more days and then would have been completely done with his service, but declined, saying he was ready to return to the U.S.

Once out of the service and back living in Alden, Sorensen got his job back at Streater and returned to everyday life fairly easily after the initial adjustment. Sorensen joined the Alden American Legion after returning home and is now a life member. He is a member of Disabled American Veterans and is a life member of Vietnam Veterans of America as well. He eventually moved on to work at Queen Stoves before getting into farming soybeans and corn on his family farm in Alden.

It wouldn’t be until reuniting and talking with his unit friends decades later that Sorensen would realize he had been living with post traumatic stress from his service, something that wasn’t talked about much until recent years, he said.

“I don’t regret it at all,” he said. “I’m glad I went through it. There were some really bad times and some really good times.

It was a rough time in our history.”