Memorial services for Robert “Bob” Johnson will be at 1 p.m. Thursday at Bonnerup Funeral Service in Albert Lea. The Rev. Clayton Balsley will officiate. Visitation will take place one hour prior to the service. Military honors will be performed by Albert Lea area veterans organizations. Inurnment will be at Graceland Cemetery. 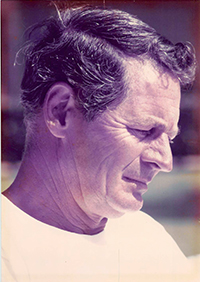 Robert James Johnson was born April 11, 1924, in Albert Lea to Dr. H.E. Johnson and Edyth (Sullivan) Johnson. He attended Albert Lea High School, where he participated in track and field. Following his graduation, Bob served his country as a naval pilot during World War II.

Bob enlisted in the United States Navy Nov. 14, 1942,  and served honorably until his discharge in December 1945. During that time, he was a part of the Torpedo Squadron 35 stationed in the South Pacific. When he returned, Bob went to college at the University of Minnesota.

On March 5, 1949, he was united in marriage to Margaret (Wayne) in Albert Lea. To this union, two children were born.

Bob owned Sullivan Paint in Albert Lea and kept working until his health no longer allowed. When he wasn’t working, you could find Bob fishing, duck hunting or taking trips up north to the cabin — basically anything that brought him outdoors. He liked taking trips to Tucson, Arizona, and Mexico. Bob was also a member of the American Legion, Veterans of Foreign Wars, Elks Club, Ducks Unlimited and Minnesota Waterfowl. Above all, Bob was happiest when he was able to spend his time with his family, grandchildren and the family dogs — which were all golden retrievers.

He is preceded in death by both parents, H.E. Johnson and Edyth Johnson; and sisters Virginia and Betty.