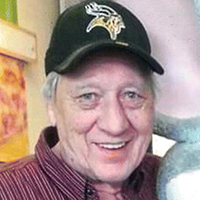 He was born May 31, 1943, in Hibbing to Sidney and Mildred (Kline) Hogfoss. Ronald graduated from Fargo High School in 1962. He started working for F.M. Motel in Fargo in 1959. He worked for many years at Kahler in Albert Lea and Rochester, Monument Valley in Arizona and Omar’s Cafe in West Concord.

Ronald married Dianne Lee Glowac on May 18, 1963, and later divorced. He later met Dawn Callier and they were together until she passed in 2012.

Ronald was an avid Elvis collector. He enjoyed shopping at flea markets, cooking and casinos, and loved his Minnesota Vikings and Twins and music. Ronald had a talented gift in working with his hands. He would make ornate food carvings and ice sculptures. He loved decorating his house and yard according to the season. He also adored Ron and Brenda’s fur babies Killer and Harley.

He is preceded in death by his parents; sister, Diane Hogfoss; and brother, Daniel Hogfoss.

There will be a celebration of life from 11 a.m. to 2 p.m. Nov. 16 at Rochester Cremation Services, 1605 Civic Center Drive NW in Rochester.