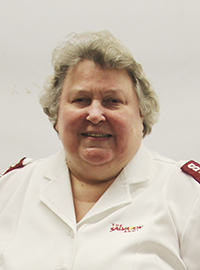 That overall goal goes right back into the Salvation Army’s general fund, Hunt said, which helps pay for community and emergency services. Those services include operating the food pantry and hot community lunches that are offered Monday through Friday, and funds also go toward helping those facing evictions or struggling to pay their utility bills, as well as those displaced by a house fire or other extenuating circumstances. Hunt said the areas the organization most often seems to help with are utility bills or other housing-related needs.

“The money we receive goes right back into our community to help our neighbors,” Hunt said. “We all need some help at some point in our lives.”

The red kettle campaign officially started last weekend, and bell-ringers will start ringing at Hy-Vee, MarketPlace Foods, Bomgaars and Walmart this weekend. There are also countertop kettles near checkout registers at various area businesses. Kettle donations were accepted during the annual Thanksgiving community meal on Wednesday, but Hunt said those funds specifically go toward the organization’s efforts to fight world hunger.

New this year, Salvation Army red kettles will also accept Apple Pay and Google Pay, according to a press release. The funds will be distributed to local Salvation Army units based on the donor’s billing zip code, and an email receipt will be sent directly to the donor’s phone. The Salvation Army will use all electronic kettle donations to provide food, clothing, shelter, family mentoring, disaster relief and other critical services for people in need, the release stated.

Donations are accepted at any of the traditional red kettles, online at SalvationArmyNorth.org or via phone by texting KETTLE to 91999.

“We do appreciate the generosity of our community,” Hunt said. “We can’t do it without them.”