Shortage of home care workers affecting those living with disabilities 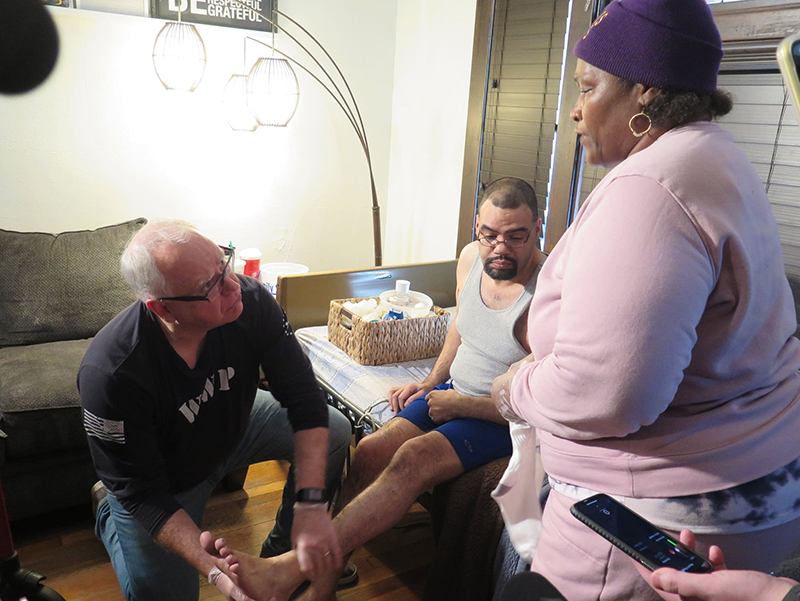 Korrie Johnson, 27, has been living in a nursing home for the past two-and-a-half years. She has cerebral palsy, which requires around-the-clock care, but a shortage of home care workers means she’s unable to live at home.

“A 27-year-old, regardless of what brought them in, should not have to be forced to be in a nursing home,” Johnson said. “I don’t have any control over what I do on a daily basis. I don’t even get to choose what I eat, hardly, except for two options on the menu.”

Her mother, Lori Dusan, was

one of her caretakers until a car accident left Dusan with a fractured back in 2014. When Dusan was unable to care for her daughter, Johnson received care from two PCA, or personal care attendant, agencies. Yet staff shortages and language barriers left these services unable to supply Johnson with adequate care. Next stop was an adult foster care home, which also had staffing shortages, and finally the nursing facility in Cambridge.

“I feel like her civil rights are being violated,” said Dusan. “I feel like she is locked up where she doesn’t belong because there isn’t the adequate staffing in the community.”

The Americans with Disabilities Act of 1990 gives people with disabilities the right to live in a community if that is where they want to live. However, high turnover rates and a large percentage of unfilled home care jobs are forcing people into institutions such as nursing or group homes. The state is not legally liable for the forced institutionalization of people with disabilities because of a labor shortage, according to disability law experts.

“I think we’re always concerned about people not receiving care in the most appropriate setting for them,” said Department of Human Services Assistant Commissioner Stacy Twite. “I think we want to really look at — what is the data telling us about that and how do we kind of build in these strategies to ultimately ensure that people are getting the right services in the right place. And that’s going to take some more digging in to some detail.”

Many advocates and stakeholders point to low wages as a major reason for the 40 percent turnover rate and 15 percent of unfilled jobs in the workforce. The average wage is slightly higher than $12 per hour, according to a survey done by the Institute for Community Integration (ICI) at the University of Minnesota. Because many of the jobs are funded through Medicaid, the only way wages can increase is via legislation.

A bipartisan group of legislators introduced a bill in February that would change the way the state calculates wages for these jobs. The bill plans to match wages in the home care industry to those of competing occupations and to account for inflation.

“This is a systemic problem. It’s a huge problem and huge problems require fiscal notes that are quite high,” said ICI director Amy Hewitt. “So, in order to get wages where they really need to be, so that people aren’t leaving these jobs to go work in food services or retail because they can make two, three dollars an hour more, we need to raise the wage by 30 percent minimally and the fiscal note attached to that is big.”

Hewitt said these workers do a variety of tasks vital for the independence of people living with disabilities. They act as teachers by training, teaching and developing lesson plans, or as occupational therapists by creating adaptive equipment and helping people learn how to function as well as they can in their own homes. Despite the importance of these roles, Hewitt believes the workers are undervalued in the community.

“People don’t know about the career, we don’t have career paths, we don’t even think of it as a career anymore because the turnover rates are so high,” Hewitt said.

According to data from the Department of Employment and Economic Development, there are currently a little more than 10,000 unfilled positions in the workforce. The shortage is expected to get worse.

“We’re anticipating that Silver Tsunami or the baby boomer generation coming into their older years where we know most people, something like 70 percent of us, will need long-term care at some point in our lives,” said Twite. She said that the state will need an estimated 68,000 additional home care workers in the coming years.

But right now, people like Korrie Johnson are stuck somewhere they don’t want to be.

“To be honest I’ve lost hope in the home care home health community,” Johnson said. “I’m hoping that in the future there’s situations where kids are free to go to college, kids are free to do what they want to do with their lives and they’re not basically trapped by their own care.”

Johnson hopes to return to school after she leaves the nursing home. She is majoring in education and aims to become a special ed teacher. Some day, she hopes to enter politics to make changes for people with long-term health conditions.