Time to fall back? One Minnesota company gets rid of its clocks instead 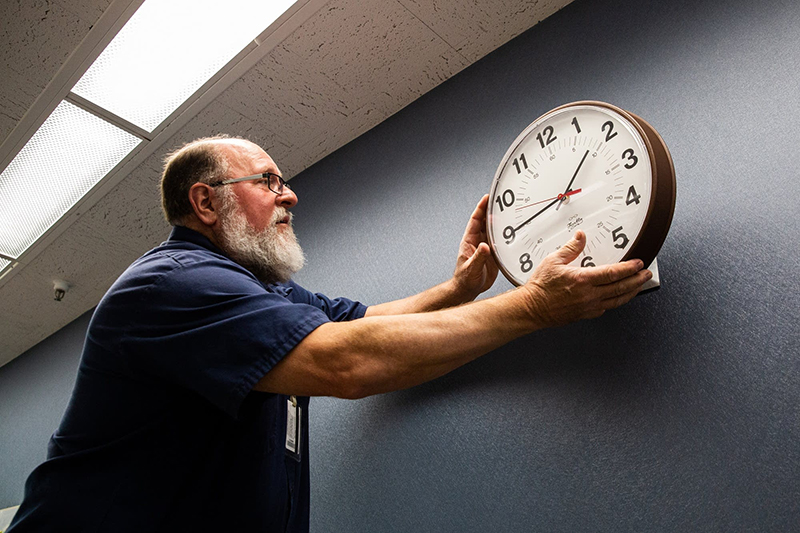 Eugene Noll removes a clock from a wall inside of the 3M headquarters in Maplewood on Thursday. - Evan Frost/MPR News

At 3M’s campus in Maplewood, the times, they aren’t a changing.

For decades, a crew of nearly two dozen people fanned out across the 409-acre campus, working in 12-hour shifts for two weekends a year, to change all the clocks. They put in new batteries, too.

“We have over 1,000 clocks here on site, and twice a year they need to be adjusted, and traditionally we were looking at ways to make that more efficient, and we decided that we don’t need them,” said Tom Berg, a plant engineering supervisor.

At 2 a.m. Sunday, daylight saving time ends in Minnesota, which means most of us will turn clocks back one hour.

Five months ago, facilities staff at 3M started going around, room by room, taking down clocks, of practically every design and size.

They’re down to the final few.

Berg said the cost of the clocks averaged around $35,000 a year.

It takes bucketfuls of batteries to keep the them ticking.

Resetting them and other maintenance requires trips up and down ladders — trips that risk injury.

Some clocks will remain, in a few laboratories and fitness areas, for instance.

While there’s a certain charm to glancing at the clock, instead of checking your smart device, even the most ardent clock watchers concede they seem to be fading into the past, like pay phones, car window cranks and check books.

Bob Tuerk has owned the repair shop House of Clocks for nearly 50 years. It’s just a few miles from 3M.

He said few companies are even making decent clocks any more. And satellite-based timekeeping, a key technology of the 21st century, has an accuracy that clock makers couldn’t have even dreamed of, he said.

“I would say you would have all the justice in the world to take ‘em down,” Tuerk said referring to 3M. He added keeping clocks that have to be adjusted is “like throwing money out the window.”

3M’s clocks aren’t going out the window, by the way. A few are being donated, and the rest recycled.