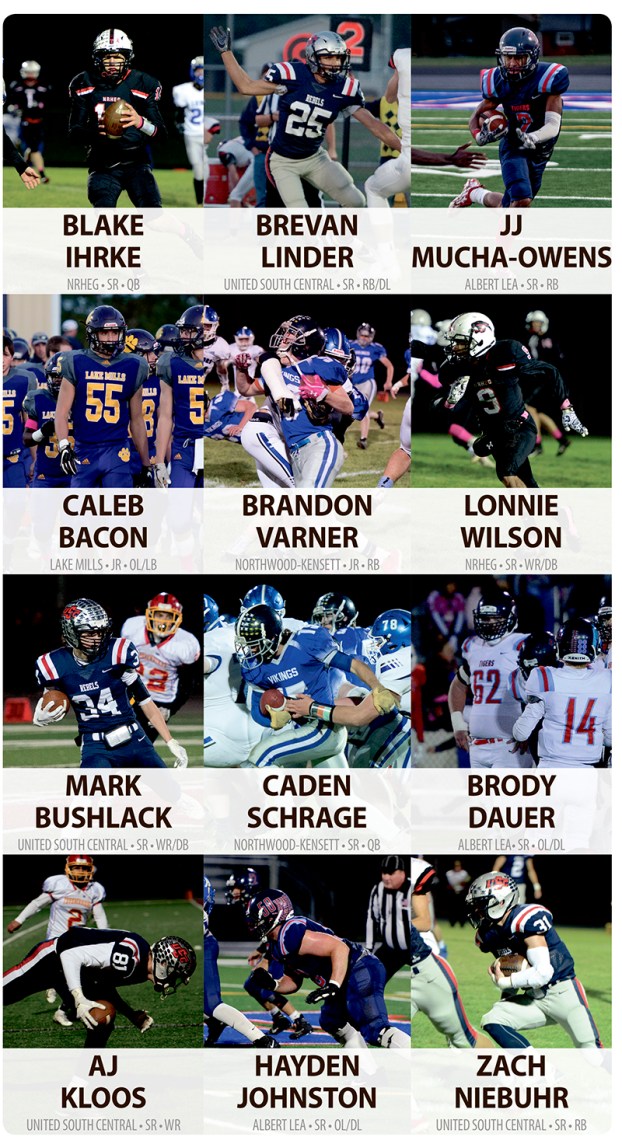 Niebuhr tore up the running game in the Tribune’s coverage area with an area-leading 290 carries. He racked up a total of 1,792 yards, coming up second in the area. He also led the area with an astounding 29 touchdowns, nearly double the second-place finisher. He totaled 50 receiving yards and 99 tackles on defense.

“Zach is arguably the greatest football player to ever play at USC,” said United South Central head coach Brandon Neseth. “He finished his career with 70 touchdowns and made the extraordinary look ordinary for the last four years he was the starting running back at USC.”

Mucha-Owens was a big part of Albert Lea’s system in the 2019 season. He led the coverage area with 1,897 yards on 205 carries. He totaled 11 touchdowns, 10 of which were rushing. Defensively, he recorded 15 tackles and five interceptions from his cornerback position.

“JJ has been the offensive player that many teams have had to gameplan to take away,” said Albert Lea head coach Corey Black. “He is the leading rusher over my six years here at Albert Lea and ended the regular season in the top-five for total rushing yards in the entire state.”

Schrage was a major weapon on both sides of the ball for the Vikings this season. On the offensive side of the ball, Schrage totaled 858 yards and 11 rushing touchdowns on top of his 158 passing yards and two passing touchdowns.

Schrage was no slouch on the other side of the football, either. He set two school records with 11 interceptions this year and 17 interceptions throughout his career. He also recorded 39.5 tackles and one tackle for loss.

Varner led the Vikings and was second in the coverage area with 15 touchdowns. He was second on the team in total tackles with 44, and totaled 2.5 tackles for loss and one sack. Varner was also selected to the first team All-District.

Kloos led the coverage area with a total of 595 receiving yards and 15 receiving touchdowns. He was a big key in the Rebels going undefeated in the regular season for the second consecutive year. Defensively, he totaled 44 tackles and three interceptions.

“A tall, athletic wide receiver, who really hit his stride his senior year,” Neseth said. “He was a matchup nightmare for opponents and was double teamed by nearly all the teams we played in the second half of our season.”

Linder set school and state records his senior year for the Rebels. Linder recorded an unbelievable 17.5 sacks throughout his senior campaign, bringing his career total to 24.5 — both United South Central records. Neseth said Linder was able to use his speed to get around big linemen in nearly every game this season.

Johnston was a force for the Tigers’ offensive and defensive lines this year. Johnson was part of an offensive line that helped block for more than 2,500 yards this season. On defense, Johnston notched 63 tackles, 18 of which were for loss, and seven sacks.  He also forced two fumbles.

“Hayden has personified Albert Lea football for the last three years.” Black said. “There is not a better representative for our program than Hayden, both on or off the field as well as in the classroom.

Bacon was pivotal in leading Lake Mills in its next step as a football team. Defensively, he led the entire Class 1A with 21 tackles for loss and was in the top four with 7.5 sacks and five fumble recoveries.

Bacon was also named to the Class 1A Iowa Print Sports Writers Association All-State team. Lake Mills head coach Bill Byrnes said Bacon has the potential to play Division 1 football if he continues his play into next season.

Dauer was also a part of the Albert Lea offensive line that blocked for over 2,500 yards in 2019. As a three-year starter, Dauer has been a leader for the Tigers for many years. He recorded 35 tackles and one sack his senior season.

“Brody Dauer is a great offensive lineman and has started for the past three years,” Black said. “Brody has blocked for nearly 8,000 rushing yards during his time at Albert Lea.”

Returning from a section champion team from last season, Ihrke was looked at as the leader for this year’s Panthers squad. Ihrke was three yards away from reaching 1,000 passing yards and threw for seven touchdowns. In the rushing game, he totaled 103 yards and four touchdowns.

“Blake was our returning leader from last year,” said head coach Marc Kruger. “He added the ability to run the ball this year as well as had an impact on defense.”

Wilson was the sparkplug for the Panthers this season, with the ability to score from anywhere on the field. Wilson caught three touchdowns this year and ran for four more. He also returned one kickoff for a score. Defensively, he recorded five interceptions and four forced fumbles.

“Lonnie was all around the best player on the field every game.” Kruger said. “Every team focused and game planned around him, and he still had a great season.”

Throughout his senior season, Bucklach was second in the coverage area with 510 receiving yards and seven touchdowns. He also recorded four interceptions on defense, breaking the United South Central school record in the process.

“He was matchup nightmare for teams that would cover him with a linebacker in the slot.” Neseth said.