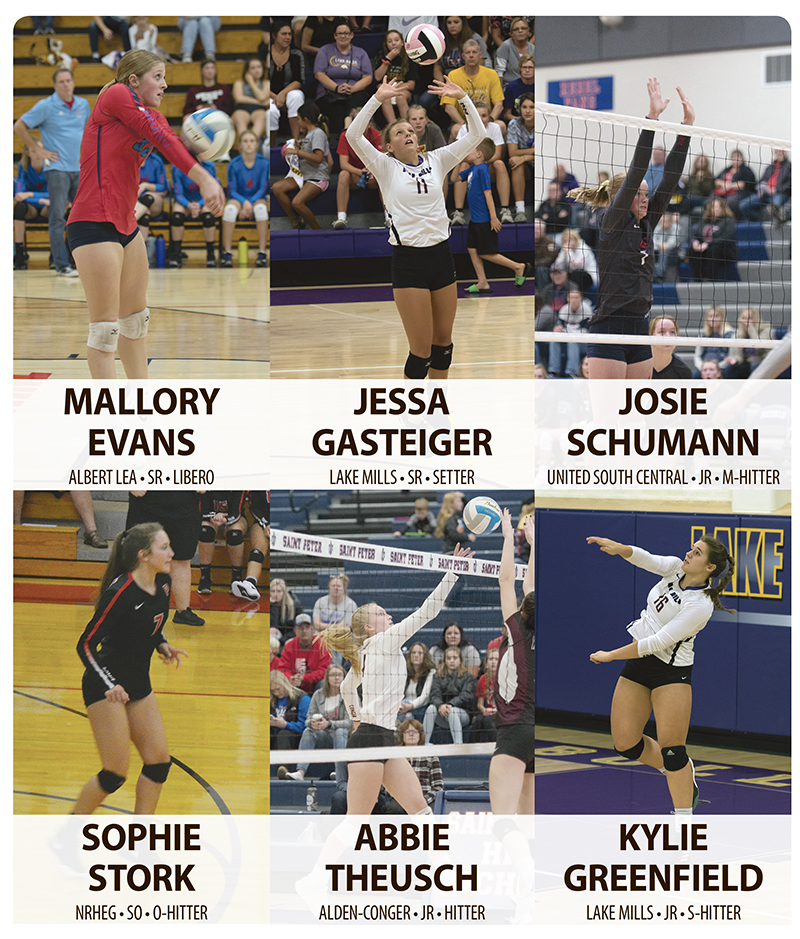 As a junior, Theusch dominated the Tribune’s coverage area and was the lone player to eclipse the 400 kill mark with 409. That total brought her to over 1,000 during her career, with one more year left. She also recorded 306 digs — second in the coverage area, 46 aces and boasted a 98.4% serve rate — also the highest in the coverage area. Theusch was also named the Knight’s Most Valuable Player and was named to the first team All-Valley Conference.

Head coach Jolene Bute described Theusch as a leader on and off the court. The Knights went 22-7 this season and return Theusch next season to try and improve that record.

Gasteiger is named to the All-Area first team for the second consecutive season with another stellar year as the Bulldogs’ setter. She led the coverage area in assists by a wide margin with 778, nearly 300 more than the runner-up. She was fourth in the area with 249 digs and also recorded 92 aces, 53 digs and 18 blocks. She was also honored as co-Player of the Year in the Top of Iowa-West Conference,

The Bulldogs finished at the top of the conference with a 30-10 record, continuing a strong volleyball tradition at the school. Gasteiger will surely be missed when the new season begins.

“Jessa is one of the best defensive players I have coached, and to say that about your setter is amazing,” head coach Jim Boehmer said. “She also is as competitive as anyone I have coached. She shows a lot of passion on the court and that was contagious.”

Like her teammate Gasteiger, this is Greenfield’s second consecutive year on the All-Area first team. Greenfield was second in the coverage area with 363 kills, while also recording 226 digs, 59 aces, 20 blocks and 19 assists. She was also named to the Top of Iowa-West Conference first team and was co-Player of the Year in the conference.

“Kylie was the strongest arm on the court most matches,” Boehmer said. “She has the ability to swing line or cross. People also overlook her ability to play defense for us. She was key to our serve-receive pattern and we build our rotation around where she was on the court.”

Schumann was the only player in the coverage area to reach triple digits in both kills and blocks. She was fifth in the area with 211 kills and dominated with 101 blocks, over 60 more than the runner-up. Schumann also recorded 52 digs, 32 aces and six assists.

The Rebels finished 7-18 on the season and went five sets in a loss in the opening round of the Section 2A playoffs. Schumann will play a big role in the future of the program as the Rebels look to take the next step.

“Josie was our strongest option offensively throughout the duration of the season,” head coach Joe Kuechenmeister said. “She has a tremendous arm swing and her volleyball IQ really came a long way by the end of the year, as evidenced by her high kill and blocking numbers.”

The lone sophomore to make the first team, Stork had a breakout year for the Panthers. Stork was fourth in the coverage area with 217 kills and sixth with 242 digs. She also recorded 17 aces, seven blocks and four assists and finished with a serving percentage of 93%.

The Panthers went 15-16 throughout the season and lost to Byron in the Section 1AA playoffs. Stork will be back for two more years to help lead the Panthers to an above .500 season.

Evans was a bright spot for the Tigers as their back row specialist this season. She was named to the Big Nine Conference honorable mention team with 211 digs, four aces and six set assists.

The Tigers finished 0-17 on the court this season, but Evans was a mainstay in the lineup and will leave big shoes to fill as she graduates in the spring.

Williamson finished her season with the Wolverines with a coverage-area leading 335 digs and 11 kills.

Tufte was runner-up in the coverage area with 483 assists. She also recorded 83 digs, 18 kills and 11 aces.

Schmidt was third in the coverage area with 268 digs during her sophomore campaign with the Knights.