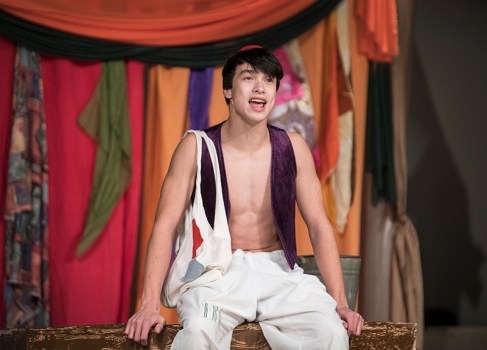 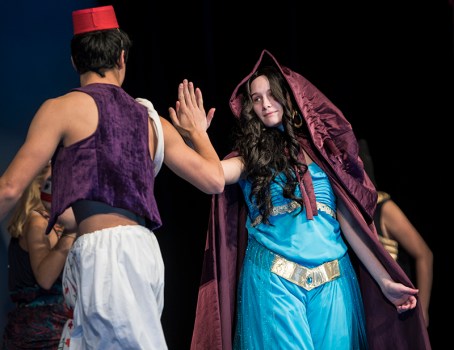 Merideth Klingbeil, in the role of Jasmine, rehearses a scene from "Aladdin Jr." with Clore. - Colleen Harrison/Albert Lea Tribune 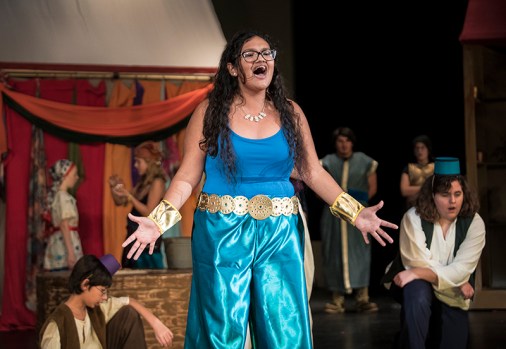 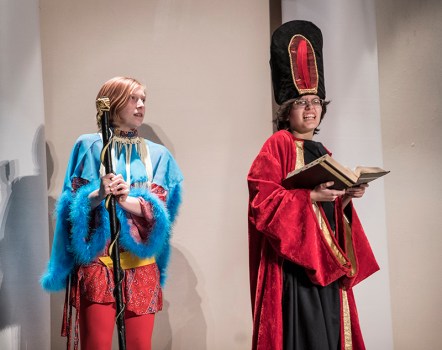 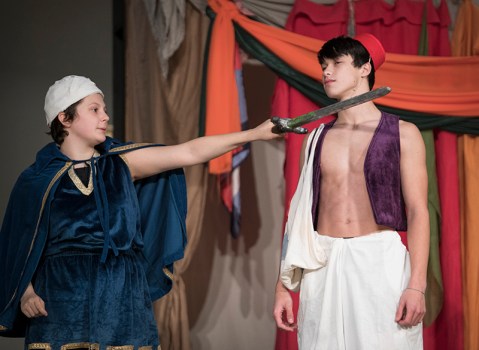 While the play is considered to be a junior version of the Disney classic, director Kirstyn Wegner said the musical doesn’t seem condensed in any way, and in fact has songs not heard in the movie.

Wegner will team up with technical director Ben Dundas for their second year of collaboration.

Wegner said they have been working on the production since auditions took place right after Labor Day, and she believes the effort has paid off. Students have not only worked hard on their performances, but on making and painting sets and choreographing dances and fight scenes, among other aspects.

The cast is generally on the younger side, and the two leads came into their respective roles by chance, in a way.

Freshman Nathaniel Clore plays Aladdin, and was originally helping with sound for the musical. That is, until Wegner heard him singing one afternoon during setup.

Clore said he has adjusted to his role on stage pretty well, and said he has “gone with the flow,” which has been made easier by the other students he gets to work with on the musical.

That sentiment was echoed by sophomore Merideth Klingbeil, who plays Jasmine. Klingbeil, who is also one of the student directors, stepped into the role after the student originally cast as Jasmine had to drop out of the musical.

“It’s been kind of stressful so far,” Klingbeil said. “… But it’s fun to be around all the people.”

Wegner said Klingbeil has done well taking on the role, and already knew most of the lines for her character.

The spirit of collaboration has been a big component of the production. Even the villains agree.

Freshmen Aislynn Schlosser and Liz Stern, who play Jafar and Iago, respectively, said the people are who have made the cast so strong. The two freshmen already have an on-stage rapport of their own, as they played the Mad Hatter and March Hare in the school’s previous production of “Alice in Wonderland.”

For sophomore Elizabeth Romano, who plays the Genie, the show has been about bringing a childhood favorite of hers to life.

“I grew up with ‘Aladdin.’ It was one of my favorites growing up,” she said. “It’s fun. We have lots of cool effects.”

Wegner said the level of care and skill the students have put into the musical has been impressive. They’ll have their own featured dancers and will also have a flying carpet — made possible by some special effects.

“I had a feeling with this group of kids that this was a show I should do,” she said.