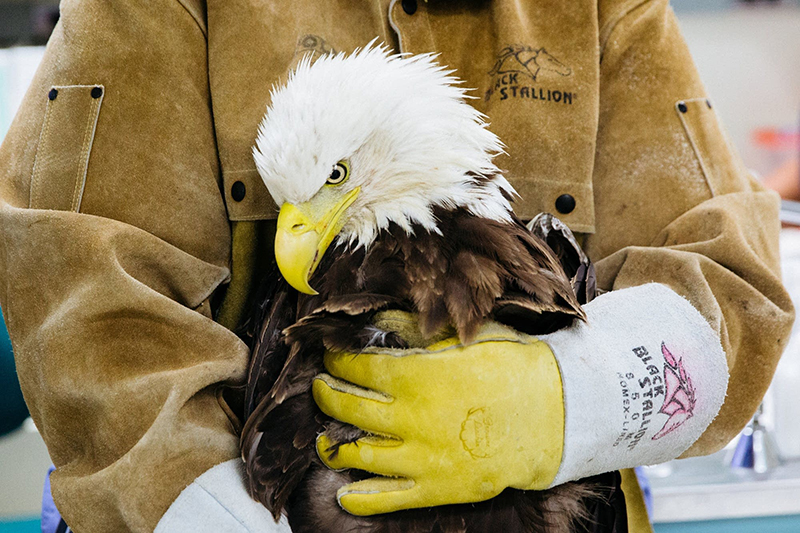 A bald eagle is held by a Raptor Center worker at the University of Minnesota in St. Paul in May 2018. - Evan Frost/MPR News

Majestic and beautiful bald eagles live around the Twin Cities metro in greater numbers. And more of them are winding up in the hospital.

“We are their health plan,” said Julia Ponder, a veterinarian at the University of Minnesota and director of the Raptor Center on the U’s St. Paul campus.

In fact, she and her staff were caring for 31 eagles recently, an all-time high for the birds at the center. So far in 2019, Ponder said the center has seen 180 eagles, a nearly 50 percent spike compared to recent years.

“It’s our new normal,” she said. “We didn’t see any consistent trends or identifying characteristics that told us why this happened so abruptly.

“It’s probably a result not only of an increasing eagle population,” Ponder explained, “but eagles are clearly becoming more adapted to living among humans.”

Eagles die or are injured when they collide with vehicles. They also contract lead poisoning after feasting on deer guts hunters leave in the woods.

The Raptor Center is straining to treat eagles, which often require two people to control them, and can cost $5,000 to treat. Nonsurgical cases run about $1,000.

Ponder said as of Friday afternoon, they’re down to 28 eagles because, happily, some have healed and returned to the wild.