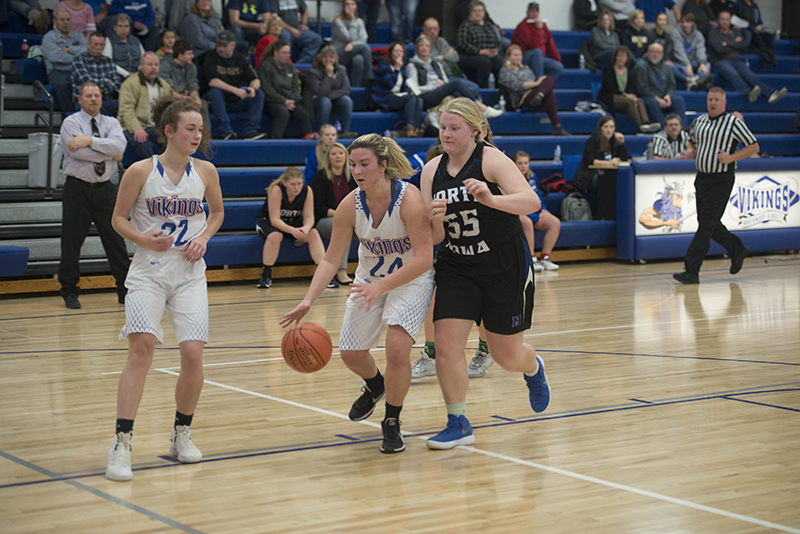 Northwood-Kensett senior Jaela Parks drives into the lane Monday night against North Iowa. The Vikings got the season opening win, 44-26, and Parks scored 10 of those points. - Tyler Julson/Albert Lea Tribune

NORTHWOOD — The Northwood-Kensett girls’ basketball team got the Tribune coverage area’s basketball season off to a start Monday night when its hosted North Iowa in a Top of Iowa Conference matchup.

The Vikings relied on a strong first half and their defense in the second half, as they went on to beat the Lady Bison 44-26.

Northwood-Kensett got the game started with a quick 5-0 run. Junior Olivia Stilley had three points on a converted and-one opportunity and senior Jaela Parks had the other two. North Iowa then battled back, going on a seven-point run of its own.

The Vikings again answered with a small run to take a 12-7 lead. The Lady Bison battled back before the end of the first quarter and sent the game to the first break in a 14-14 tie. Sophomore Carly Hengesteg, junior Ruthie Conlin and senior Clara Davidson added scores for the Vikings. 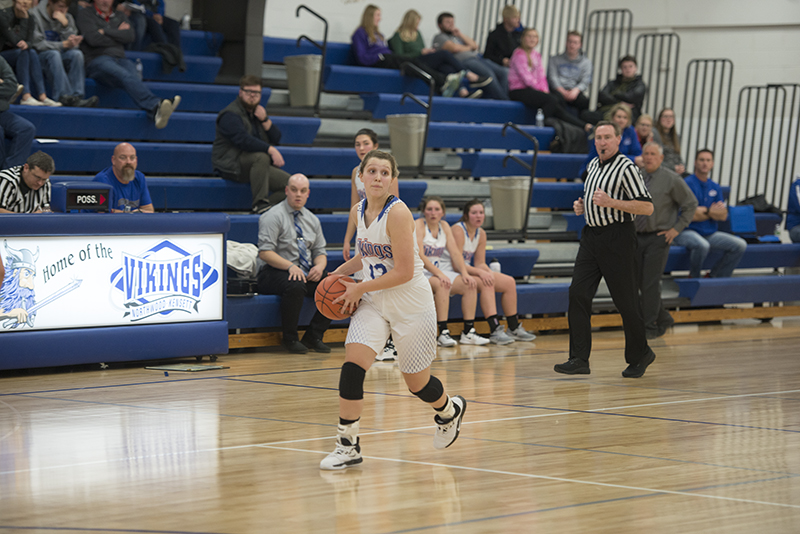 Northwood-Kensett senior Clara Davidson looks for a pass as she dribbles up the court Monday night at home. Davidson led the Vikings with 12 points, all of which came from behind the three-point line. – Tyler Julson/Albert Lea Tribune

Northwood-Kensett dominated ball control in the second half. Leaning on its 18-point lead, Northwood-Kensett scored just four points in the third quarter, but used long, drawn-out offensive possessions to take North Iowa out of the game.

The Vikings held on to possession for the entire last minute and 30 seconds of the third quarter and went into the fourth with a comfortable 37-19 lead. Hengesteg and sophomore Marli Backhaus were the lone Vikings to score in the quarter.

Again, to start the fourth quarter, the Vikings used a one and a half minute possession to drain the clock. When the Lady Bison started to climb back into the game, Davidson and Stilley hit two big shots to halt any momentum.

Northwood-Kensett sailed its way to an easy 18-point win to start the season. Davidson led the team with 12 points, all on three-point shots. Parks finished with 10, junior Ruthie Conlin had six and Stilley had five.

The Vikings move to 1-0 on the season and will play again Dec. 3 with a home game against the Bearcats of North Butler.