A token of appreciation and a heartfelt thank you 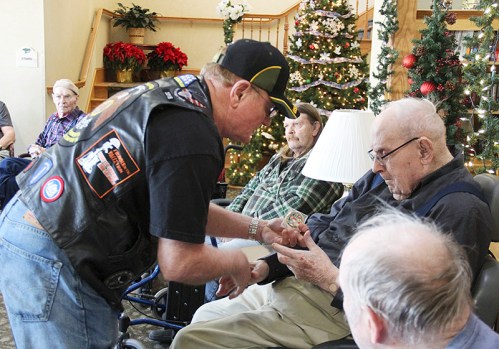 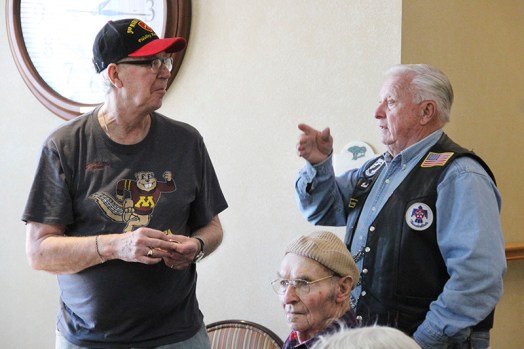 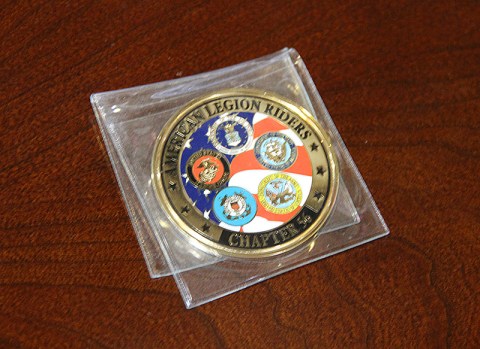 This year's challenge coin includes logos of the five branches of the military on one side. Sarah Stultz/Albert Lea Tribune 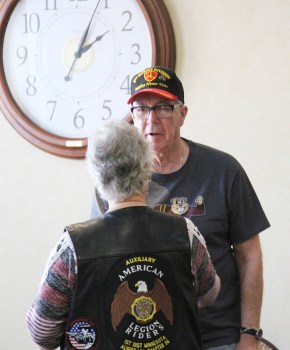 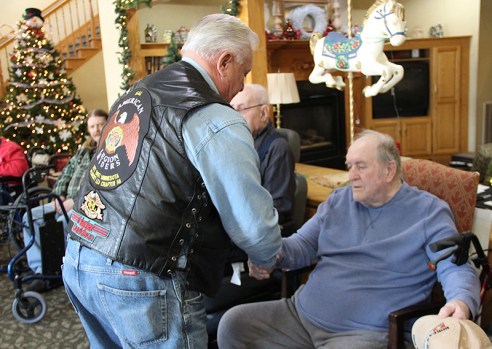 Larry Millhouse shakes the hand of Rocky Wedin Thursday and hands him a challenge coin in appreciation of his service. Sarah Stultz/Albert Lea Tribune 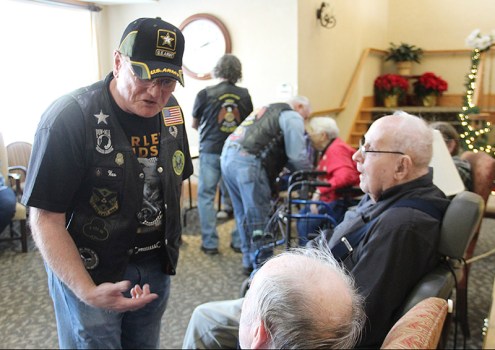 Albert Lea American Legion Riders are spreading a message of gratitude this month for veterans in area care facilities.

In groups ranging from four to more than a dozen, members have traveled around to care centers in Albert Lea, New Richland, Wells, Blooming Prairie, Northwood and Lake Mills and presented each veteran with a challenge coin decorated with the five branches of the military on one side and a tribute to prisoners of war and soldiers missing in action on the other.

Duane Thomas, director of the Legion Riders group, said as of Friday afternoon, members had made 14 stops and given out 143 coins. On Friday, they stopped at Oak Park Place in Albert Lea, presenting coins and sharing memories with seven veterans there.

Thomas said this was the third year for the group to hand out challenge coins, and this year the group expanded its reach into neighboring communities.

“We just want to say thank you for your service,” he told the group during a brief ceremony at the facility. “If it wasn’t for you guys, we wouldn’t be here today.”

After each veteran was given a coin, the Legion Riders mingled with the veterans, sharing experiences of military service and other conversation.

Thomas said the group picked up on the challenge coin initiative after seeing the Austin Legion Riders doing the same thing.

He said he has enjoyed seeing the smiles on the faces of the veterans and has had the opportunity to hear many amazing stories of service, including of one veteran who helped liberate a concentration camp and another who served with Gen. George Patton.

He recalled an experience last year visiting a veteran who was sitting in a wheelchair in his room when they arrived. After he was given the challenge coin, the man began to cry.

It is a touching gesture not only for the recipient, but also for those who give the coins.

Thomas said so many people in nursing homes feel like they are forgotten.

Sandy Norby, another one of the Legion Riders members in attendance Friday, said she was touched hearing the stories of the veterans.

“It’s a privilege to work with the riders,” she said.