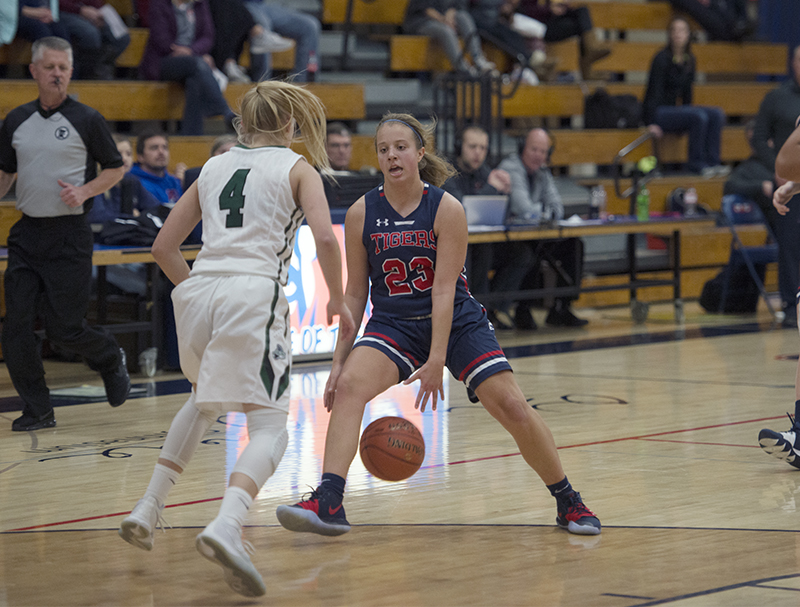 The Tigers scored off the opening tip and never looked back, dominating most of the game and beating the Falcons 63-44.

Sophomore Jordan Juveland won the opening tip, which led to an open pass to a streaking sophomore Taya Jeffrey and an easy lay-in.

The Tigers shot well in the opening minutes of the game and stopped the Falcon’s offense on nearly every possession. The Tigers led the game with a 8-2 run through the first three minutes of play. 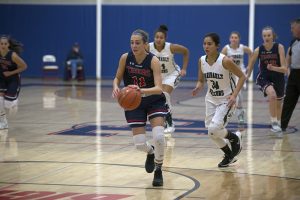 Albert Lea sophomore Taya Jeffrey races to the hoop to score off the opening tip. Jeffrey led all scorers with 26 points, 18 of which came in the second half. – Tyler Julson/Albert Lea Tribune

Albert Lea was not stopping yet, however. The defense of the Tigers was stellar forcing turnovers and playing a physical brand of basketball to get to out rebound the Falcons.

Faribault was forced to call a timeout with just under seven minutes remaining in the half after Albert Lea had opened up a 23-6 lead.

The Falcons clawed their way back into the game before the halftime whistle, trimming what was once a 17-point lead to a 12-point lead at the break.

Senior Sam Skarstad led all scorers at the half with 15 points. Jeffrey had eight, while freshman Kendall Kenis had three and Juveland, sophomore Annika Veldman and freshman Kristina Espinosa each had two.

The Tigers came out in the second half and continued to showcase their powerful offense. This time it was Jeffrey that went on a scoring spree, scoring the first eight of the Tigers first 10 points of the half.

Juveland was also especially effective down low, pulling down numerous boards and wreaking havoc for any dribbler coming into the lane.

While the Falcons trimmed the Tigers’ lead to 10 at one point, Albert Lea quickly turned the tide and extended the lead past 20. The Tigers’ passing was especially effective throughout the game, using smart passes that led to multiple easy looks.

Albert Lea used long, drawn-out possessions the rest of the way to drain the clock and the hopes of any sort of Faribault comeback.

Of the 31 points scored by Albert Lea in the second half, Jeffrey was responsible for 18 of them. She led the way in scoring with 26 points total. Skarstad finished with 21, while Juveland had seven and Espinosa Veldman, Kenis and senior Ashley Butt combined for nine.

The Tigers record their first win and move to 1-1 on the season. They will play again Tuesday when they host the Winhawks of Winona.