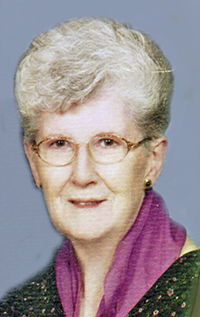 Alice passed away at Hillcrest Rehabilitation Center in Mankato after a long 10-year battle with Alzheimer’s. She was 83.

Alice Gertrude (Riss) was born Dec. 6, 1935, in Worthington to parents Henry and Eva (McQuiston) Riss. She graduated from Worthington High School and went to beauty school in Mankato.

On Sept. 1, 1956, she was united in marriage to Wendell Arnold in Worthington. To this union, five children were born. The couple moved to Albert Lea in 1964. Alice had been a resident of Albert Lea up until the last six years, when she moved to Mankato to be closer to her daughter.

Alice worked at J. C. Penney in Albert Lea for many years. After retirement she worked part time at the Freeborn County Historical Museum. Alice was a member of St. Theodore Catholic Church and was a very devout Catholic. She was also a member of the Legion Auxiliary.

Needlecrafts, reading mystery novels, watching movies and baking were some of Alice’s favorite hobbies. Nobody could make caramels quite like Alice! She was a loving wife, mother and grandmother, and cherished time spent with her family.

She is preceded in death by her parents Henry and Eva Riss; husband, Wendell Arnold; great-grandchild, Emmalynn Garcia; and 10 brothers and sisters.

In lieu of flowers, memorials are preferred to the Alzheimer’s Association at www.alz.org.

Funeral services for Donald Harris, 91, of Albert Lea will be at 11 a.m. Thursday at Bayview Freeborn Funeral Home,... read more