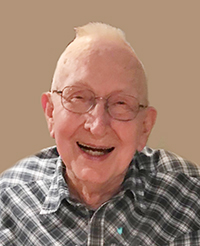 Bernie was born April 8, 1929, the eldest of nine children, in Ruthven, Iowa, to the late Oscar A. and Ruth B. (Sampson) Lee. He graduated from Cylinder High School in 1947 and proudly served his country in the U.S. Air Force. Bernie then attended Waldorf Junior College.

He married AnnJeanette O. Opdahl on Sept. 2, 1950, in Minnesota. He continued his education at Luther College and earned his degree from Mankato State while raising five children, Aurora, Marcus, Forrest, Dana and Meredith. Bernie worked for Pottawattamie County Conservation as a park officer at Arrowhead Park in Neola, Iowa. He retired in 1992. Bernie was a member of Trinity Lutheran Church in Avoca and Avoca American Legion Post No. 227.

In addition to his parents, Bernie was preceded in death by his wife, AnnJeanette Lee, on Feb. 15, 2019; daughter, Aurora Jeanette Lee, in 1967; one brother and three sisters.