Constance “Connie” J. Steidler, 83, of Eyota passed away Friday, Nov. 29, 2019, at her home. Funeral services have been held. Burial has taken place at St. Theodore Catholic Cemetery in Albert Lea. 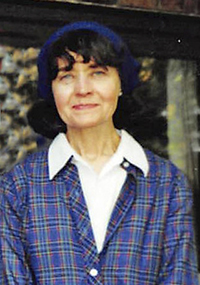 Connie was born July 26, 1936, to Melvin and Lucille (Archambault) Mangskau in Albert Lea. She grew up in the Albert Lea community, attending St. Theodore Catholic School before graduating from Albert Lea High School. Following, Connie was united in marriage to William Steidler on July 22, 1959, and the couple started their family. They were stationed in Fort Sill, Oklahoma, while William was in the Army. Upon his discharge, the Steidlers moved back to Minnesota where Connie continued being a homemaker for her young family. William’s teaching career moved them to New London, Rochester and Byron. In 1969 they settled on a farm near Eyota, where she continued to live until her passing.

Connie was an incredibly devote Catholic and was always a member of her local Catholic churches.

Connie enjoyed tending to her plants and caring for her rock garden. She loved all animals, especially dogs, and enjoyed listening her radio.

Connie is survived by her husband, William Steidler, of Eyota; her son, James (Elizabeth), of La Crescent; and her daughters Ann Steidler of Eyota and Dorothy (Jeffrey) Nielson of Oacoma, South Dakota, and their children and spouses Jessica (Marvin), Cherissa (Jess) and Mitchell (Megan). She is also survived by her siblings Michael (Carol) Mangskau of St. Paul, Charles Mangskau of Albert Lea and Terry Olson of Albert Lea; and several nieces and nephews.

Connie was preceded in death by her parents Melvin and Lucille; and her brother-in-law, James Olson.