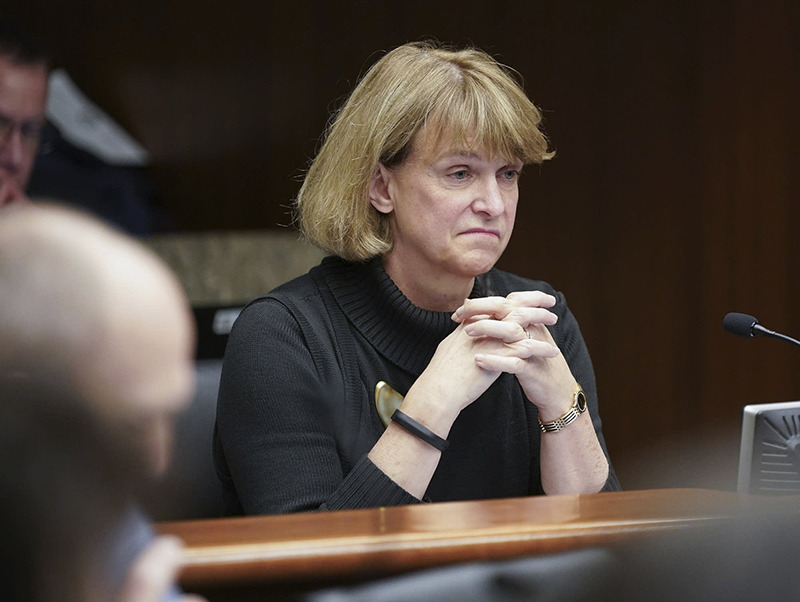 State Human Services Commissioner Jodi Harpstead testifies before lawmakers about what she has learned in her first 90 days and her plans going forward Monday. The embattled state agency has come under fire for recent breakdowns in regulatory oversight. - Glen Stubbe/Minneapolis Star Tribune via AP via MPR News

The head of Minnesota’s Department of Human Services said “soft” internal controls in the agency led to more than $100 million in payment issues dating back decades, but she said has a plan to get the agency on track.

Commissioner Jodi Harpstead told a House committee Monday that she’s working to tighten internal controls within the agency so that payment decisions are made and signed off on by the correct people within the massive department, which employs roughly 7,300 people.

“We have a high capacity department that I would describe as soft around the edges,” Harpstead said. “We need to sharpen soft interdepartmental process controls to be sure that payment services decisions are signed and documented by the right people.”

Harpstead, who has been on the job for 90 days, was laying out her plan to turn the agency around to members of the House health and human services committee. She said she’s also created a new independent advisory council to DHS, which will include Bill George, former head of medical device manufacturer Medtronic.

She also pushed back on the notion that the agency is in “chaos” and “crisis,” despite a string of news stories starting over the summer, when former DHS Commissioner Tony Lourey suddenly resigned. Since then, a number of other top officials in the agency have also left, and it was revealed missteps by staff led to some overpayments.

But Harpstead said they represent 0.1 percent of the total payments the department made for services during that time. DHS has a budget of $18 billion every two years and serves more than 1 million Minnesotans, including low-income families on welfare, the elderly, people living with disabilities and struggling with mental health and substance abuse.

“When we run billions of dollars of taxpayer money and every Minnesotan has an opinion about how that should be spent, we quickly become the department everyone loves to criticize,” she said. “Fair enough, we can live with that.”

The state expects the tribes and counties to help pay those funds back.

Rep. Nick Zerwas, R-Elk River, said the overpayments might be a small fraction of the department’s overall budget, but it’s a huge burden for the tribes and the counties.

To date, no payments have been made to the federal government, Harpstead said.

Prompted by the issues, lawmakers have been discussing for months a possible plan to break up the agency into several smaller ones to provide more oversight. DFL Gov. Tim Walz is expected to announce a possible plan later this week.

“If you’re going to have a job cutting down a tree, you should spend the bulk of your time sharpening the axe,” Walz said at a separate event Monday. “I think we have spent our time sharpening that axe right now, and now after today it will be time to start thinking about what that alignment looks like.”

Harpstead said she’s worried separate agencies would ultimately be more expensive to taxpayers, but she did signal support for breaking off the direct care and treatment parts of DHS, which includes the state’s metal health treatment hospitals, sex offender treatment and some nursing homes. Roughly two-thirds of the department’s employees work in that part of the agency.

“It’s the one part of the department to me has made any sense to think about,” she said.

During the hearing, Harpstead also revealed an investigation into former DHS Inspector General Carolyn Ham has recently been closed and no disciplinary action was taken. Ham, who leads a team designed to root out fraud in health care spending, has been on paid leave since March following a complaint.

Harpstead would not detail the complaint against her, but she said Ham will be returning to the department in a new role.

After the hearing, House Republicans said they were frustrated by a “lack of accountability” for problems that have cropped up in the agency. Rep. Anne Neu, R-North Branch, said Republicans want a complete “forensic” audit of the agency.

“We’re certainly concerned that there’s no accountability and no recommendations on what to change,” she said.