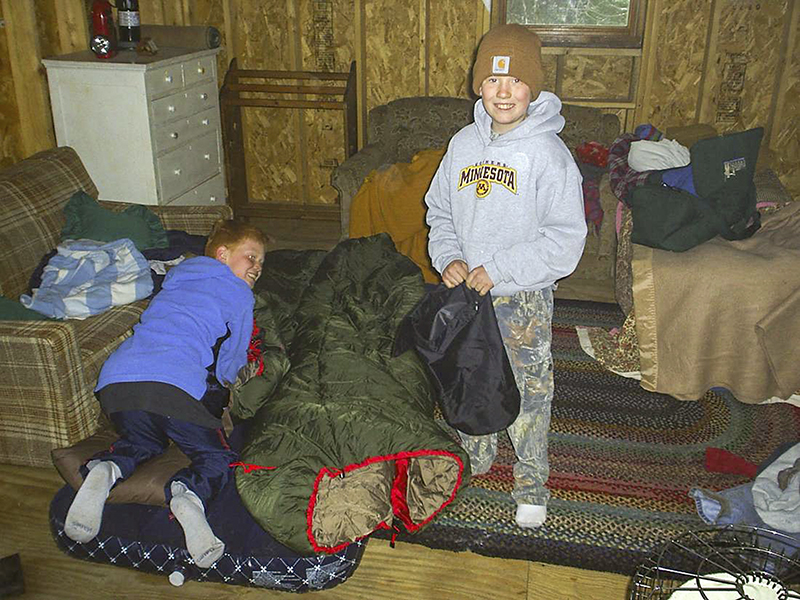 Trevor and Taylor Herfindahl were getting ready for bed while staying at the family cabin in 2005. - Provided

I do believe we have had enough cold weather to help the ice on the lakes thicken up enough for foot traffic. If you notice, I didn’t use the word “safe” when speaking about the frozen lakes. No ice fisherman should ever assume that the ice is totally safe. Make sure you check the ice depth before venturing out, especially with the up and down temperatures we have been experiencing.

As I look outside and see the snow that seems to be here to stay for a while, I am reminded of a few times when I ventured up to the cabin in early spring. When we first bought the land to build our cabin, a winter visit north was not even on my mind. Once we had the cabin usable, I couldn’t wait to take a winter trip or at the very least an early spring trip.

For two years in a row I talked my two oldest grandsons, Trevor and Taylor, into going along. The boys were excited to go on this early spring adventure. It was a trip that I had wanted to take all winter long, mainly just to check and see how the newly erected cabin had weathered the winter.

We actually made this trip two years in a row, after which the boys figured out that there was not a whole lot to do at the cabin in the winter. Trevor hadn’t gotten into ice fishing yet and his hopes of the water being open at this time were dashed by the thick ice that still covered the area’s lakes. The boys and I would drive up on Friday and return home on Sunday.

Our cabin, at that time, had no insulation in the floors and walls and no wood stove. It was very bare-bones, not much more than a large shed. The boys slept on the floor in their sleeping bags on top of an air mattress. Their Grandpa slept on an old single roll-away bed that had a mattress that was probably harder than the floor. We heated the cabin with a kerosene heater which threw out a fair amount of heat, but had a definite odor. We didn’t have the gas range yet, so all of the cooking was done on a propane camp stove, except for the hot dogs which we roasted on the campfire.

Taylor was the campfire guru, he would start the campfire as soon as we got to the cabin and had things put away. He would then make sure that we had a nice fire going all the way until we called it a day. Trevor would help with the fire and then take my .22 Henry rifle and look for those little red squirrels that like to find their way into buildings. The boys would take turns with the .22 trying to outsmart those little red critters.

I really enjoyed those days spent with the boys, but after a couple of years they had decided that maybe the long drive north wasn’t worth it for just two days. Both of the years we made that trip we found trees down and, on the second trip, there were many trees down everywhere you looked. I was really glad to have those two hard working grandkids along. We had no chain saw, just a couple of axes and a bow saw. Those boys would go to work and before I knew it, we’d have those trees chopped up and stacked in a pile.

Yes, those are great memories that I will always have to cherish and I have some pictures to look back on just to jog my memory of those days. I am very blessed to have four “super” grandsons that have enjoyed spending time with their grandpa at the cabin. There were one or two years when Brian, their dad, and I had taken them up to the cabin during MEA. All three of Brian’s boys love hunting all critters with feathers, especially waterfowl.

Fall is a great time to spend in the north woods, and when family is there, it makes it even better. One of the times I was able to join my son Brian and his three sons, I found that they had developed a routine for hunting waterfowl. They would get up before dawn, make sure that their guns and gear were ready and then head out. The lakes were still open so they would take our little boat that we keep on the shore, fire up the trusty 5.5 horse Evenrude and head across the lakes to the blinds that they already had set up the previous day.

While they were hunting I would put on a pot of coffee and have a nice hot breakfast waiting for their return. The cabin is now fully insulated and almost finished inside, the wood stove keeps it nice and cozy, which is what a cabin is supposed to be. Our cabin is not anything fancy, but it is what the name says, a real cabin and one that I plan to keep enjoying to the fullest in the years to come.

Please remember to keep our service men and women in your thoughts and prayers. Without them we would not be able to enjoy the freedoms we enjoy today. When you show respect for our flag you are also honoring them.