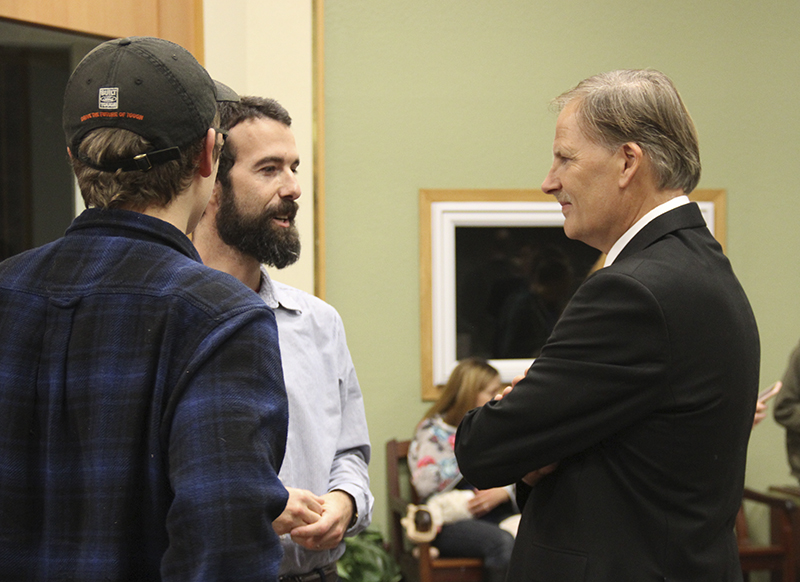 Republican Gene Dornink, right, speaks with supporters after his announcement at Northbridge Mall that he will run for the Senate District 27 seat. - Sarah Stultz/Albert Lea Tribune

Accompanied by the Senate majority leader and a group of about 40 others, Hayfield Republican Gene Dornink on Tuesday announced he will run a second time for the Minnesota District 27 Senate seat against DFLer Dan Sparks.

Dornink made the announcement in Albert Lea in front of the former Herberger’s building inside Northbridge Mall that is slated to become a MercyOne clinic in the next year. A Riverland Community College graduate, he made an additional announcement in Austin at the college.

Dornink said it was time to have someone in the seat who could relate to farmers, business owners and hardworking families, and said he believes he has real working experience and common sense to bring to the position.

He said in the last election he ran against Sparks initially to give the longtime senator some competition for the seat and noted he thinks Sparks took the seat for granted. Dornink said he has raised money for the last year and a half — raising $40,000 — and campaigns almost every day in his role as a small business owner, connecting with people and hearing their concerns.

“I’m not always going to vote the way that you want, but I will listen and tell the why,” he said.

Dornink has lived in southern Minnesota all of his life and grew up on a dairy farm. He attended Riverland to become a carpenter and was a union carpenter, building things such as schools and hospitals. 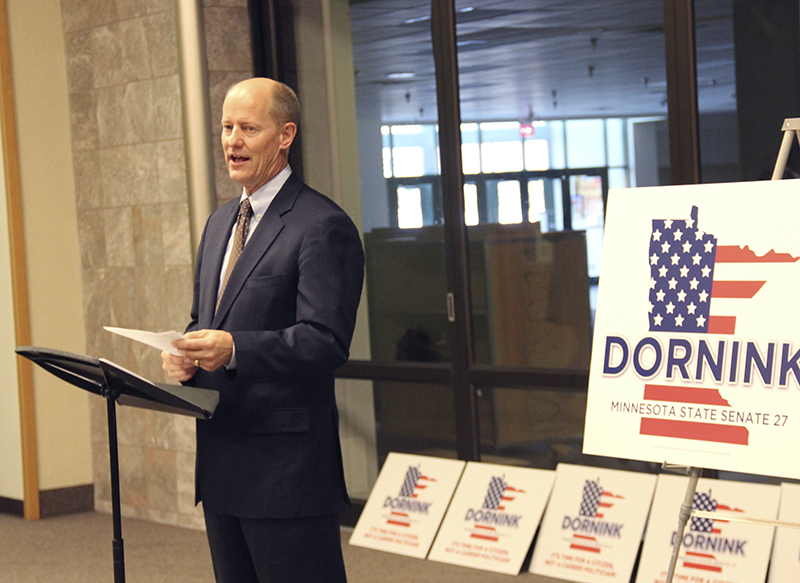 Ten years ago after being laid off, he started a family business, which has grown into a thriving business, he said, an opportunity that allows him to work alongside many of his children.

Kelly Dornink, one of those children, when introducing his father, described him as a leader and a successful businessman because of hard work, self-sacrifice and honesty.

Gene Dornink said he is motivated to help construct a more transparent government and thinks all politicians should be accountable to the voters.

Senate Majority Leader Paul Gazelka, R-Nisswa, compared the District 27 race to other areas around the state that have had longtime Democratic senators who recently flipped Republican.

“This is one we know should be in Republican hands,” Gazelka said of the district.

He said President Donald Trump won the area by 5,000 votes in the last election, and he thinks things are only going to get better for the Republicans in the next election because he anticipates even more voters coming out.

He listed off several measures that Democrats have supported recently, including a 20-cent gas tax, what he described as “extreme” gun laws, $12 billion in proposed tax increases, making Minnesota a sanctuary state, implementing new payroll taxes for small businesses and passage of recreational marijuana, among others. He said these things could come to fruition if the Democrats gain control of both chambers.

Gazelka said the Republicans won the majority in the Senate by one seat during the last election, and the House and governor and other leadership positions are Democrat.

“This we know is very, very important, and so do they,” he said.

A call to Sparks was unreturned as of press time.