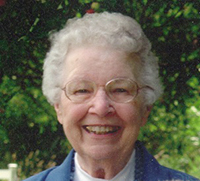 A funeral service will be at 11 a.m. Saturday at Trinity Lutheran Church in rural Kiester. The Rev. Bob Stover will officiate. Visitation will be from 3 to 6 p.m. Friday at Bruss-Heitner Funeral Home in Wells and will continue one hour prior to the service at the church Saturday. Interment will be at Trinity Lutheran Cemetery. Bruss-Heitner Funeral Home in Wells is assisting the family. To leave an online condolence, visit www.brussheitner.com.

Elaine attended rural school in District No. 78 and attended ninth through 12th grade at Bricelyn High School, where she graduated in 1942. Elaine went to teacher’s training for a year in Blue Earth. She taught in rural schools for four years.

On Dec. 20, 1946, she was united in marriage to Calmer Bidne at Brush Creek Evangelical Church.

She was preceded in death by her parents; husband, Calmer Bidne; granddaughter, Jennifer Bidne; brothers Keith and Wayne Sahr; and sisters Verle Knapton and Milda Steckelberg.