For Minnesota governors, almost every day is like Christmas 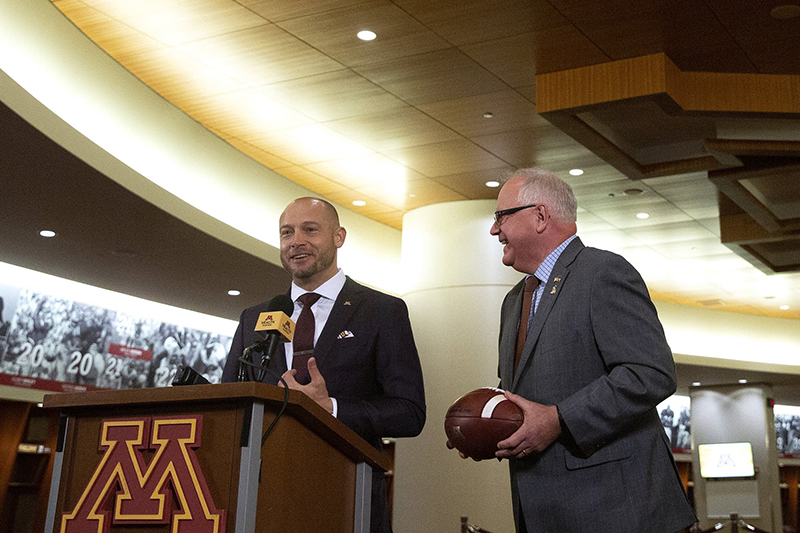 But it is far from the only gift that has come Walz’s way in his first year in office nor is it the one that’s touched him the most. More than 100 gifts have been presented to Walz this year, according to a roster kept by his office. While governors get a lot of gifts, technically the offerings aren’t theirs to keep.

They started rolling in on his first full day as governor. U.S. House Speaker Nancy Pelosi sent him an orchid he kept at the Governor’s Residence.

Since then, he’s received dozens of books and a collection full of ball caps, neckties, scarves and logo shirts.

Others have given fishing lures, candy, booze and seeds — hemp seeds, lotus seeds and more. In March, he brought home a loon door stop; this month, the Canadian ambassador gave him a pewter loon. A replica of the University of Minnesota-Duluth hockey championship ring came his way in April.

His teenage son took a liking to that one.

“He wanted to wear that ring around and see if he could show folks that,” he said.

Walz said it would stay put.

The people behind the gifts are average Minnesotans, businesses, nonprofit groups, foreign dignitaries and local officials.

Harmony Mayor Steve Donney dropped off a “Harmony-opoly” board game in January.

It’s just what it sounds like: A spinoff of the popular Monopoly game with some local touches. The tokens represent area icons and the properties and deeds reflect Harmony businesses.

Donney said city leaders were going for distinctive. And they appear to have succeeded. The game is at the official residence now.

So is the Quran that Hamdy El-Sawaf gave Walz when he came to the mansion for an Iftar dinner during Ramadan in May.

“Governor, would you please accept this gift humbly,” El-Sawaf recalled about the moment he presented the central text of Islam to Walz as soon as he walked through the doors.

He was nervous about how it would go over, but El-Sawaf said the governor was all smiles.

“It made not only my day, but many days to come, if not the whole year,” El-Sawaf said.

In an interview, Walz said it has a treasured place with his family Bible and a Buddhist statue.

The governor said he was also moved by the gold-painted insulin vial a woman with diabetes gave him as she urged state leaders to find a way to make the medication more accessible. He has pulled it out at news conferences and carries it with him.

He’s also fond of some nature-themed books written by students from Prairie Wetlands Learning Center in Fergus Falls. “Some of the pictures in here are just spectacular,” he said.

Some of the trinkets get displayed in the governor’s office or at the Summit Avenue residence. Perishable goods are typically consumed. Others items are donated to charity. Governors can buy the items at fair market value to keep them personally.

When the Pearson’s Candy company gave then-Republican Gov. Tim Pawlenty a gigantic Salted Nut Roll, he said he took it with him on an overseas trip to see deployed troops and ate it with them.

Pawlenty said he was honored to receive flags from Minnesota-based military units from their deployments.

The oddest gift Pawlenty remembers was a set of oversized “Incredible Hulk” rubber gloves that roared when banged together.

“Some group had wanted me to be tough on the Legislature when they gifted them to me,” Pawlenty said in an email. “I displayed them in my office during much of my term.”

A select few items wind up in possession of the state Historical Society.

The Historical Society recently received more than a dozen items from Gov. Mark Dayton’s tenure: A Paul Bunyan and Babe the Blue Ox bobblehead he got from a chamber of commerce; signed Lynx memorabilia from the team’s WNBA championship years; a woolen blanket of Native American significance.

Brian Szott, the society’s head of curatorial affairs, said the objects accepted tell a story about the governors and the times they serve.

“Once we take an object in, our obligation to preserve it in perpetuity is a big one. So we’re very careful,” Szott said. “So even with our gifts to the governor, we select very carefully what might represent both the governor’s tenure but also how it reflects the history of Minnesota.”

The Historical Society has an Ojibwe bolo tie given to Pawlenty and a birdhouse shaped like a gourd painted to depict former Gov. Jesse Ventura.

Ventura was a celebrity before he came into office in a shocking 1998 win. Gifts to him flooded in. They included an autographed pair of boxing gloves from Muhammad Ali, a personal hero. He also accepted a drumstick and guitar pick from members of the Rolling Stones. (Those didn’t make it to the state Historical Society.)

One day some Walz items will go into the society’s collection.

Which brings us back to that prized Gophers football. Walz was giddy as he accepted it from coach Fleck in the team’s locker room in November. It was days after the Gophers upset highly ranked Penn State.

“We humbly accept this on behalf of a grateful Gopher nation. This state’s values are being reflected in this team,” Walz said, promising to display it for all to see.

The ball — with the 31-26 final score on one side — now sits on the desk of an aide, right outside of Walz’s own office. A glass case is being made to preserve it.

And as long as Walz is in office, that ball will be there, too.