Funeral services for Harold “Harry” Steenblock will be at 10:30 a.m. Friday at Bonnerup Funeral Service in Albert Lea. The Rev. Eileen Woyen will officiate. Visitation will take place one hour prior to the service. Military honors will be performed by Albert Lea area veterans organizations. 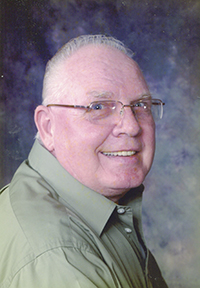 Harold passed away surrounded by his family Sunday, Dec. 1, 2019, at St. John’s Lutheran Community-The Woodlands in Albert Lea. He was 82.

Harold Leroy Steenblock was born April 28, 1937, in Belmond, Iowa, to parents Ronald and Ruth (Meyer) Steenblock. He graduated from Belmond High School in 1955. In September 1955, he enlisted in the United States Air Force and was primarily stationed in Guam and Lincoln, Nebraska. He served honorably until his discharge in 1959.

Harry married Bev Kerdus, and together they were blessed with three daughters. The couple later divorced.

Harry worked at Cut Low Grocery as a manager and then Bridon Cordage, where he continued to work until retirement. When he wasn’t working, you could find Harry playing cards and striking up conversations with anyone who would listen. He liked watching football and baseball and collecting sports cards.

Grandchildren and great-grandchildren were the apple of his eye, and he treasured moments that he spent with them!

He is preceded in death by parents Ronald and Ruth Steenblock; his daughter, Kimberly; and sisters Connie and Gladys.

The family would like to thank the staff at Mayo Hospice in Albert Lea, St. John’s Lutheran Community-The Woodlands and the Mayo Clinic Health System in Albert Lea emergency room department for their exceptional care and compassion shown toward Harry.