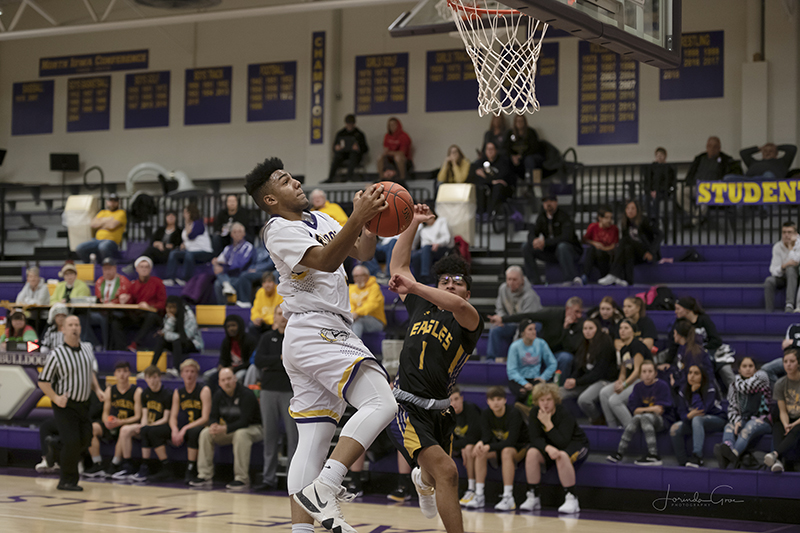 Lake Mills junior Dashawn Linnen launches for a breakaway lay up Tuesday night against Eagle Grove. The Bulldogs beat the Eagles 65-39 to move to 4-1 on the season. - Lory Groe/For the Albert Lea Tribune

The Lake Mills boys’ and girls’ basketball teams hosted Eagle Grove Tuesday night, both looking for their fourth win of the season.

The girls’ team started the night, getting big performances from multiple players and earning a 68-42 win.

Leading the way for the Bulldogs was senior Jessa Gasteiger with 22 points, 12 of which came from beyond the three-point line. Junior Taylor Ingledue totaled 15 points and sophomore Leah Moen was close behind with 14. Six other Bulldogs scored throughout the game, combining for 20 points. Senior Hope Levine pulled in 12 rebounds.

“This was our most compete game of the season,” said head coach Garrett Patterson. “Scoring was fairly balanced and a lot of girls got minutes. We shot the ball close to 50% on the night because of our quality shot selection.” 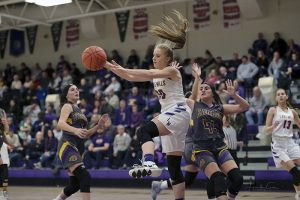 Lake Mills senior Megan Groe passes out from under the basket Tuesday night at home. The Bulldogs dominated the Eagles, 68-42. – Lory Groe/For the Albert Lea Tribune

The girls’ climb to 4-2 on the season and play again Friday on the road against Garner-Hayfield/Ventura.

The boys’ team also had no trouble dispatching of the Eagles, winning 65-39.

Fritz led the way in assists with five, while Berger and Groe each had four.

The boys move to 4-1 on the season and will be back on the court Friday when they travel to take on the Cardinals of Garner-Hayfield/Ventura.