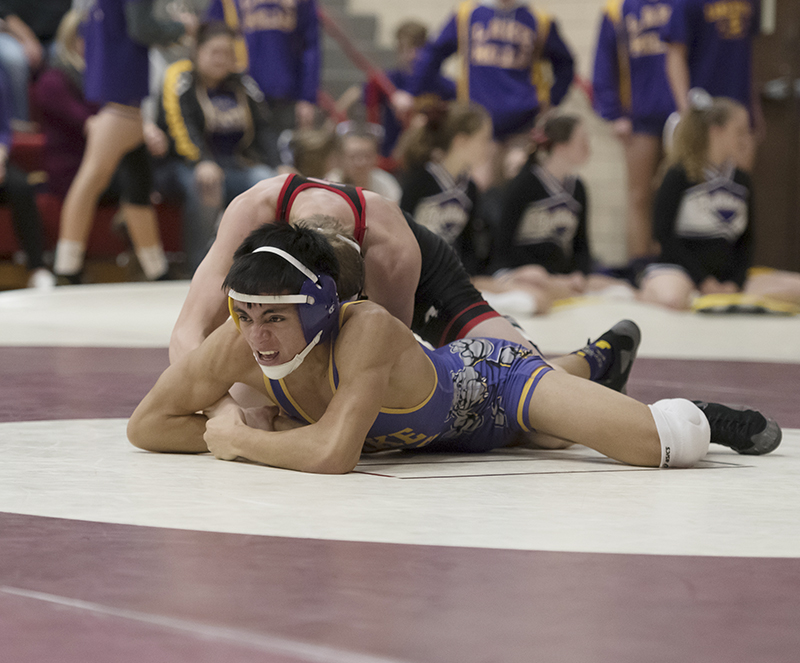 Lake Mills wrestler Jimmy Gallardo fights to get off his stomach Thursday night at Newman Catholic. Gallardo went 2-1 on the night, while the Bulldogs finished 3-0 as a team. - Lory Groe/For the Albert Lea Tribune

The Lake Mills wrestling team was tested on its first night out to start the season Thursday night.

The Bulldogs started the night by dismantling Newman, 69-12.

“The kids were excited to finally get to wrestle after two and a half weeks of practice,”  head coach Alex Brandenburg said. “We were really aggressive against Newman and got many pins.”

The second meet of the night was a classic battle throughout as Lake Mills snuck by Nashua-Plainfield, 33-31.

The Bulldogs got off to a fast start, leading 15-0 after four weight classes before the Huskies dominated the next five weights to jump to a 25-15 lead.

Lake Mills battled back to take four of the final five matches to edge the Huskies, 33-31. “This was a great dual with many twists and turns, and it was worth the price of admission,”  Brandenburg said. “We knew this dual was a toss up, and we had some individuals step up big to help secure the win.”

Lake Mills would finish off the night by thumping Garner-Hayfield/Ventura 66-16, to start the season 3-0.

Harnish picked up his 100th career win in the first dual of the night by pinning Henry Determan of Newman.

The Bulldogs will be back on the mat Saturday when they travel to Blue Earth on a mutli-team tournament.