A memorial service for Lisa M. Baldwin will be at 10:30 a.m. Dec. 28 at Bonnerup Funeral Service, Albert Lea, with the Rev. Kurt Farrell officiating.  Visitation will begin at 9 a.m. and continue until the time of the service. 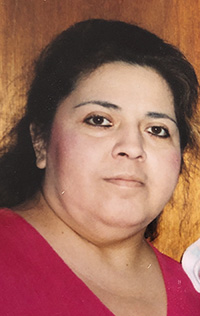 Lisa Marie Baldwin was born on March 13, 1963, in Waseca, to parents Jose and Andrea (Garcia) Duenes.  She grew up in the New Richland area, graduating from New Richland Hartland High School in 1981.

Lisa was blessed with four children: Marie, Jeremy, Bryan and Dustin. The family was raised in the New Richland and Faribault area. Lisa spent the last 10 years with her loving fiancé, Chris Alfvegren. The couple lived in Barney, North Dakota. Lisa was raised Catholic and was deeply rooted in her faith. She worked at a variety of nursing homes in both Minnesota and North Dakota as a CNA. When she wasn’t working, she enjoyed camping, traveling when she could, but mostly spending time with her family. Her grandchildren were the center of her world, and she did everything she could to be active in each one of her grandchildren’s lives.

She is preceded in death by both parents, Jose and Andrea Duenes; and a brother, Henry Duenes.