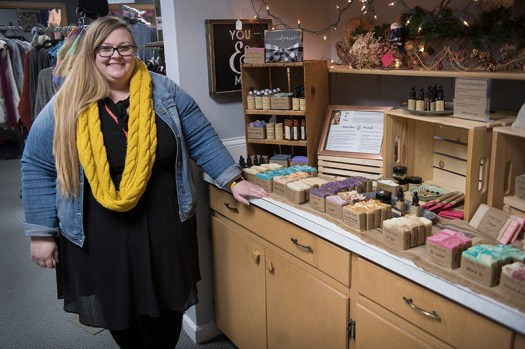 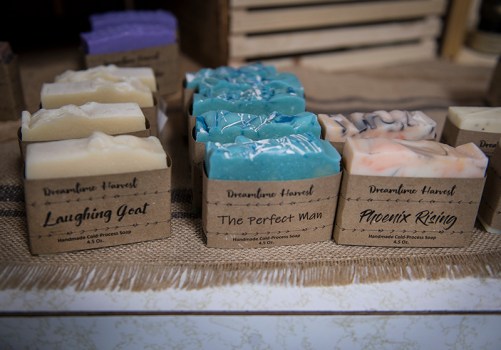 Gurung said she has almost as much fun coming up with different names and product descriptions as she does making the actual products. - Colleen Harrison/Albert Lea Tribune 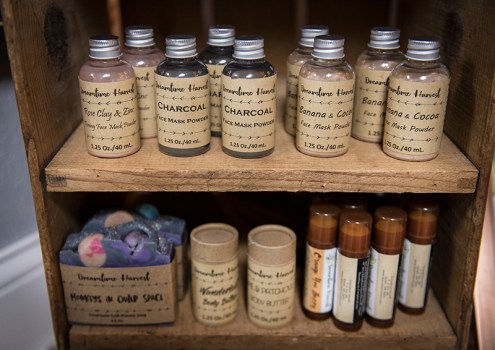 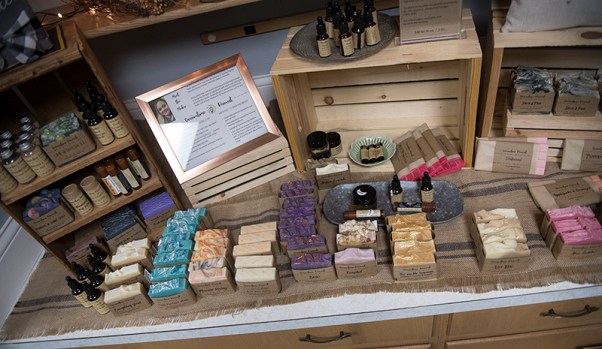 Dreamtime Harvest soaps can be found at The Homestead Boutique and It’s Worth It Massage & Wellness Studio in Albert Lea, Bruss-Heitner Boutique in Wells, and Kee Kafe and Quilter’s Cottage in Kiester. Gurung is redeveloping her website to accept online orders, as well. - Colleen Harrison/Albert Lea Tribune

A chance purchase nearly two decades ago has turned into both a passion and a profession for one local woman.

Michelle Gurung was attending a festival down South when she bought a handmade bar of soap. She loved the idea, and started making her own soaps in 2001.

“It sparked my attention,” she said.

Back then the online makers community was much smaller, Gurung said, as the only way to find others to talk with on the internet was through chat groups. Still, Gurung found ways to research soap making and did so for about six months before trying it herself. She wanted to be confident her first time trying the process, especially since it would mean handling lye — a strong chemical that can lead to burns or other injuries if not handled properly.

She also wanted to have a handle on what oils had which purposes in soap making. For instance, some control how hard the soap is, while some make it cleaner, Gurung said.

Self-proclaiming herself a “habitual dabbler,” Gurung said she has gotten into different crafts over the years — from projects dealing with yarn, paints and more — and has run out of steam in a number of those areas. That wasn’t the case when she tried soap making, though.

“Soap making was the first thing that, when I did it, right away it clicked,” Gurung said.

She said the process reminded her of ceramics in a way.

“There’s a transformation,” she said.

The soap making takes about two hours initially in Gurung’s kitchen, and then she leaves the soap to cure for four to six weeks. During the first few days the lye is converting to soap, and the rest of the time the bar is forming and leveling out so it’s gentle on the skin.

After giving soaps to family and friends, Gurung said she started going to craft shows in 2002. She continued to make her soaps as a side job before falling out of it a little bit, until people she knew started asking her for more soaps.

In between her initial introduction to soap making and her return to the craft, Gurung said she got her packaging down and learned more on the marketing side.

Gurung has branched out her offerings to include wax meltables as well. She said most soap makers have dabbled in candle making, and wax meltables offer a similar effect without having an open flame — a bonus for those with pets or young children. Gurung also works to make her meltables phthalate-free, as she said most in the fragrance industry are working to do as well. She forms her wax melts into a candy bar shape so that the pieces can be snapped off and don’t require any plastic packaging.

Gurung said she is trying to keep her plastic use to a minimum or not use it at all in her packaging. She said she doesn’t use palm oils due to their role in deforestation, and is working on using more lab-created micas as opposed to mined mica — which she said is usually mined by children or other people in poor working conditions.

Gurung’s business, Dreamtime Harvest, now sells her soaps, wax meltables, body butters and face serums at The Homestead Boutique and It’s Worth It Massage & Wellness Studio in Albert Lea, Bruss-Heitner Boutique in Wells, and Kee Kafe and Quilter’s Cottage in Kiester. In addition, Gurung sells her products herself and at different craft and handmade shows as well as at the Albert Lea Farmers Market, and is working on redeveloping her website so that orders can be placed online.

Gurung, now a Kiester resident after growing up outside of Albert Lea and living in the Twin Cities for a while, works full-time as a graphics technician at Albert Lea Public Library when she isn’t creating her soaps and other offerings. She said two of her most popular soap products  are “Uff Da!” which has oatmeal, milk and honey scents, or is “made of Minnesota,” Gurung said. Another popular soap is her Phoenix Rising, which she said is a colorful orange. There are a handful of soaps and scents she always carries, and then a number that are seasonal or unique, she said.

Gurung can be reached through her Dreamtime Harvest Facebook page.