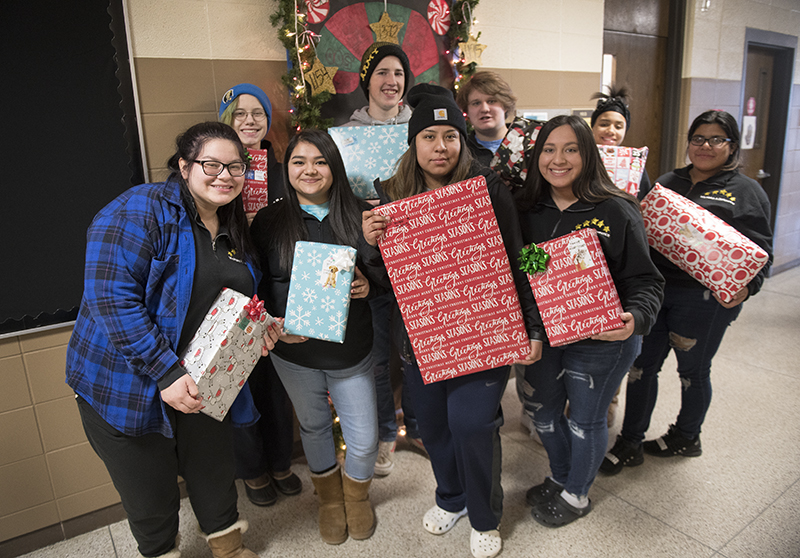 ALC students find growth, give back thanks to MAAP Stars

When Tatiana Villarreal was younger, she would have described herself as shy.

However, thanks to a class she has been a part of through the Albert Lea Area Learning Center, she has noticed she is changing.

“I’m more open,” said Villarreal, a senior. She even credits the class, through MAAP Stars, with helping her get her first job at Hy-Vee.

MAAP Stars is a student organization that started through the Minnesota Association of Alternative Programs and encourages success, teamwork, achievement, recognition and self-esteem.

Teacher Paula Olson said the Area Learning Center started offering the MAAP Stars class two years ago. It is helping students learn how to work as a team, to be leaders and to be better public speakers. It also helps the students take part in community service projects and experience career-related activities for making career decisions, among other initiatives, she said. The students then take what they’ve learned and worked on locally and present at the state level for a chance to win awards.

Twelfth grader Wyatt Reed said one of the projects he has enjoyed was the Youth Frontiers Kindness Retreat the students facilitated for Halverson Elementary School fifth graders. It is a daylong workshop, teaching the students about kindness and being nice to each other.

Villarreal said her favorite project was one called Smile with a Child, where she and the other students raised money for less fortunate children and then bought presents for them for Christmas. Their goal was to raise $600, but in the end they raised almost $1,400. The students work with a social worker at Halverson to select the children for the gifts, and the recipients remain anonymous.

Hernandez said when she was younger, she and her family benefited from programs such as Toys for Tots, and if it weren’t for those programs, she wouldn’t have gotten toys.

“I was given to, and now I get to give back,” she said. She noted MAAP Stars has given her a greater appreciation and has helped her become less selfish as she learns to give back to the community.

Several of the students said the class helped get them out of their comfort zones and interacting with each other more.

“You go into MAAP Stars and you realize a lot of what you don’t have and what you’re missing out on,” said student Yosselin Lopez, who said she came into the school not liking anyone. Now things have changed.

“This is a softer, gentler person, Olson said of Lopez.

Eleventh-grader Leo Niemeier said MAAP Stars has given her a creative outlet and a chance to use her interest in art and help others. She helped design the yearbook cover and sweatshirts.

Students said recently they helped with a burger bingo at Halverson where families could earn groceries while playing bingo. They raised $300 to pay for processing pork that went into the grocery bags.

Olson said she hopes the students can eventually do more in the other Albert Lea elementary schools as well.

The students said they like that the class has helped them show the community the good they can do.

“It’s nice having something for alternative schools,” Hernandez said. “It’s nice to show that we’re not what people think we are. We’re in the community making a difference.”