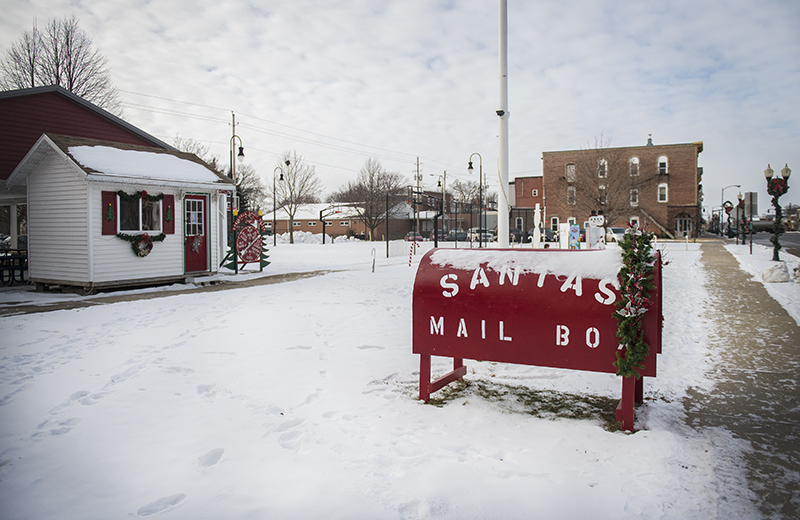 Northwood's mailbox to Santa Claus has been a children's holiday must-stop for over 50 years. - Colleen Harrison/Albert Lea Tribune

Mailbox for letters to Santa Claus created in 1968

NORTHWOOD — For more than 50 years, eager children have flocked to the large red mailbox off of Central Avenue in Northwood to mail letters each Christmas season to Santa Claus.

His daughter, Teresa George-Zenz, who now serves on the Northwood City Council and is the president of the Northwood Area Chamber of Commerce, said she was one of the first four children to place letters in the mailbox when it was set up the first year. She was 4 years old at the time.

She has a digital copy of a photograph featuring her and her sister and their father, along with two other children and a few other adults, from the first year the mailbox was in place.

The box itself has seen only a few changes over the years. While it used to have an abbreviated form of Merry Christmas on the front, the words are now spelled out in entirety. The box also used to have a large flag. Letters from children are placed into a slot on the front.

“Everybody loves it,” George-Zenz said. “It gets a lot of use.”

Over the years, the area around the mailbox has developed to include a Santa village, with a small house, and more recently, a large postcard created by George-Zenz’s mother, Gloria George, that people can step behind and put their faces into for photos.

George-Zenz said her mother has been a big part of the tradition and also likes decorating the mailbox and the village.

She said she regularly sees children walk across the street to the mailbox, drop their letters off and then spend time in the Santa village for awhile.

“The school kids come in groups,” she said.

All of the children who place a letter into the mailbox should expect to receive a letter back, as long as they include an address on their letter, she said.