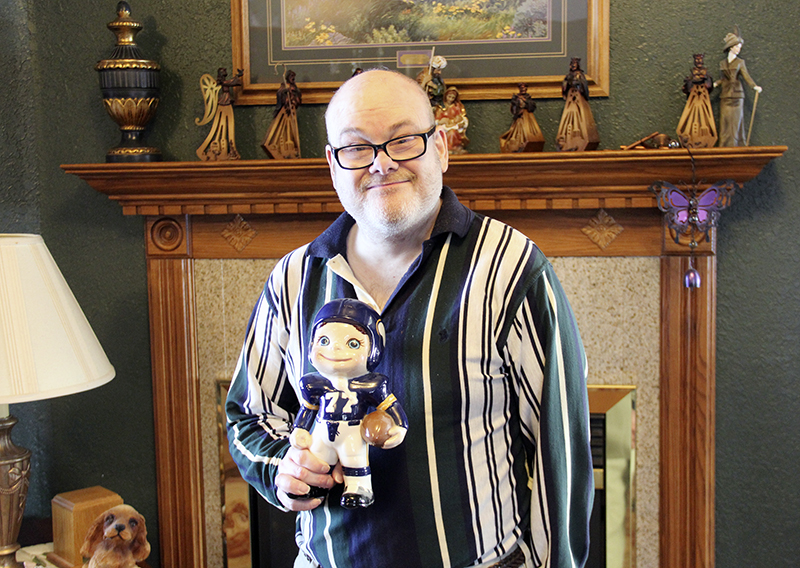 Robert Kirchner may be most known in Albert Lea for his job at Walmart, but he is also an avid sports fan. Here, he holds an old Vikings football figurine at his home. - Sarah Stultz/Albert Lea Tribune

Walmart worker is a lover of sports, has photographic memory

Robert Kirchner is a familiar face for many people in Albert Lea.

An employee at Albert Lea’s Walmart for almost 22 years — 21 as a greeter and six months in his new role as a host — Kirchner is likely someone most Albert Leans have interacted with if they’ve walked into the store for groceries or other items.

For all those years, Kirchner was one of the first faces customers would see as they walked into the store. Now, he works near the self-checkout machines closest to the grocery side door, watches people as they’re checking out and assists them when needed. He prefers the greeter position most, but was shifted to the new role because of reorganization through the company.

A 1989 Albert Lea High School graduate, Kirchner said he likes the job because it gets him out of bed and helps him socialize.

Though Kirchner is a highly visible person at the store, most may not know his background and some of his capabilities.

His mother, Margie Kirchner, said her son visited many psychologists and other medical professionals over the years, but it wasn’t until he was 38 that he was diagnosed as having Asperger’s syndrome. That has impacted him in several ways, such as not being able to be around loud noises. When a storm comes and he is at work, Walmart allows him to work in the back, she said.

It also affects him because he has what he and his mom describe as a photographic memory. He can recall dates and times from the past — everything from what happened on most dates in history to important dates for his friends and family, and especially dates dealing with sports history.

“If he’s heard it, read it, watched it, he never forgets it,” his mother said.

He loves reading and enjoys doing research on various topics on his iPad.

Most of the time, if you give him a date, he can come up with something that happened that day in history.

She said her son would have loved to have been a sports statistician. He can recall not only dates of games, but the players, the plays, the times and the scores — and all without any effort.

Such as the game he attended June 20, 1976, at the Metropolitan Stadium between the Detroit Tigers and the Minnesota Twins. The game went 13 innings, and he even remembers what he ate that day: a brat, a hotdog and a pop.

Baseball is his favorite sport to watch — the Twins, most specifically.

He said he has attended three games at the Metropolitan Stadium, five at the Metrodome and he hasn’t attended any yet at Target Field.

He lived in his own condo for 18 years at The Abbott until his father, DuWayne Kirchner, died on March 30, 2016. After that, he moved in with his mother on Campus Lane, where the two now help each other.

Margie Kirchner said her husband and son were especially close, and his death was difficult for him.

The mother said her son is normally kind of a quiet person, aside from his job at Walmart and his enthusiasm for sports.

“He can talk about sports for hours,” she said with a smile.

Family: mother, Margie; brother, Brad, and his wife, Jody, and their children Landon, 21, and Kaedyn, 17

Interesting fact: has been to 34 states, two provinces in Canada and over 60 major cities