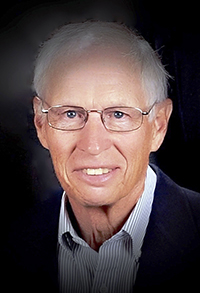 Roe was born June 2, 1943, in Albert Lea, the son of Ralph O. and Dorothy (Hawkinson) Erlandson. He graduated from Albert Lea High School and in 1965, received his Bachelor of Arts in economics from Lawrence University in Appleton, Wisconsin.

While at Lawrence, Roe fell in love with Deanna “Dee” Davis, whom he married Aug. 20, 1966. After receiving his Masters of Business Administration from the University of Illinois in 1967, Roe and Dee moved to Austin, where he began a 37-year career as an operations research analyst for Hormel Foods.

While in Austin, Roe was active in Westminster Presbyterian Church as an elder and a member of the choir. He was on the board of the YMCA and an active member of the Y’s Men’s Club. Roe’s lifelong love of swimming, water skiing and sailing began while growing up on a lake. He added to his outdoor activities with snow skiing, running, biking and hiking. Roe accomplished many personal goals: completing the Boston Marathon, finishing the Hawaiian Ironman Triathlon, summiting Mount Rainier, competing in the Western States 100-mile trail run and completing a coast-to-coast bicycle ride. LIFE IS GOOD!

After he retired from Hormel in 2004, Roe and Dee enjoyed many wonderful travels and in 2009 relocated to Oro Valley, Arizona. In his retired life, he continued to inspire others to pursue an active outdoor life. Roe will be remembered for his loving involvement and close relationship with his family. Roe had a quiet and thoughtful way about him, which endeared him to all who met him. His sudden death was a shock to all who knew him and he will be greatly missed.

Roe is survived by his loving wife of 53 years, Deanna “Dee” Erlandson, of Oro Valley; his daughter, Kristine Lee, and her husband, Mark, of Middleton, Wisconsin; and his son, Steven Erlandson, of Breckenridge, Colorado. Also surviving is his granddaughter, Sydney Lee, of Baltimore; his brother, Kent (Sue) Erlandson; sister, Nancy (Lendall) Herter; and many nieces and nephews.

Roe was preceded in death by his parents and his sister, Jeannie Erlandson.

Memorial services will be at 2 p.m. Saturday at Westminster Presbyterian Church in Austin and at 2 p.m. Jan 8 at Vistoso Funeral Home in Oro Valley.