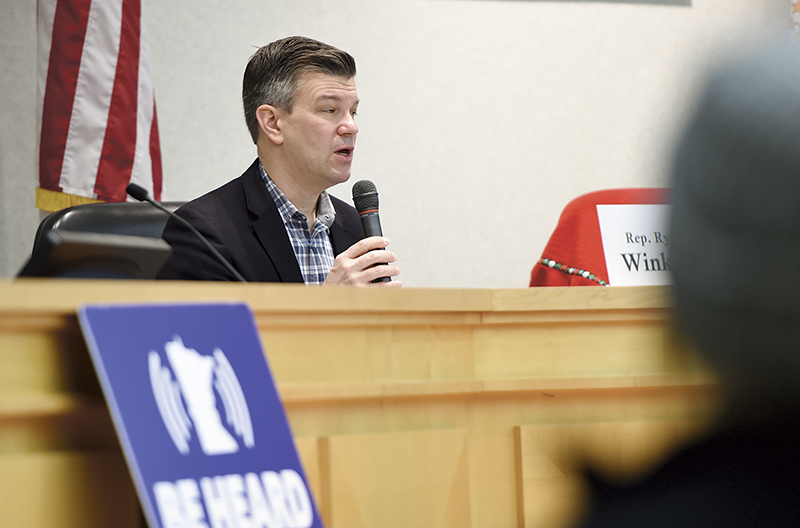 AUSTIN — Those who attended the cannabis listening session in the Austin City Council Chamber on Saturday expressed a variety of viewpoints in the growing debate of responsible adult-use cannabis legislation.

The session was held jointly by Minnesota House Majority Leader Ryan Winkler and Rep. Jeanne Poppe (DFL-Austin) and also featured Maren Schroeder, policy director for Sensible Change Minnesota, an advocacy group dedicated to promoting policy changes involving the use of marijuana, including its medical and recreational uses, with a focus on THC, which contains psychoactive properties.

The views expressed from both sides of the debate ranged from its medicinal properties to public safety concerns.

However, the session’s point wasn’t to sway people’s attention one way or the other, but to simply listen and exchange ideas.

“The goal here today is to hear as much as we can and not win an argument here today,” Winkler said.

Winkler opened the session with a presentation laying out the challenges of legalization as well as the concerns surrounding implication and keeping the public safe.

The discussion also touched on the subjects of availability and the price tag for medical marijuana in a state that has some of the strongest regulations of any other state in the union where legalized medical marijuana is allowed.

Patrick McClellan of Bloomington is a long-time advocate of medical marijuana. McClellan, who has a rare form of MS, is currently using medical marijuana to treat his condition. He stressed the importance of it in his treatment, as well as the continued work to keep it available.

As the session continued, passions started running deep as people told personal stories of loved ones dealing with medical issues, such as chronic pain and cancer, who could benefit from medical marijuana, but struggled to make use of it due to lack of availability and the high price tag.

They also expressed frustration as to how long it takes to even get the medicine they need. Just this year, chronic pain was added to the list of medical conditions that can use cannabis in treatment; however, that won’t go into effect until August 2020.

“People just have to sit around with chronic pain until the state decides to get them healthy,” said Susan Sindt, who made the drive from Maplewood. “Where’s the apology for the people who have been suffering for all these years that have to beg for their medicine?”

Angie Hanson of Albert Lea was one of those who feels it’s time to take that next step toward legalization, expressing how she was touched by the stories she heard.

However, while many approve or even urged the legalization of cannabis, there were some in the audience who questioned whether or not legalization was the right way to go, saying it wasn’t something to rush into quickly.

Dennis Schminke raised concerns for how the state would pay for it and whether or not cannabis would be more accessible to children, which Winkler earlier in the session admitted shouldn’t happen, noting studies that show marijuana adversely affects developing youth.

“I think there are enormous public safety concerns around legalization of marijuana,” he said. “There’s no objective way — that I know of — to measure impairment. You have to think about the public safety effects.”

He was also concerned about what this could mean for employers.

“I am concerned about employers,” Schminke said to the room. “Employers have huge interests in this thing. As an employer, I would need to be able to say, ‘you can smoke marijuana, but you can’t smoke marijuana and drive my truck.’”

Schminke and some others in attendance urged a slow approach to the issue, but Winkler responded that there were examples out there for the state to work with.

“There are unintended consequences of going slow, but we have the advantage of learning lessons from other states,” Winkler said. “Colorado has already learned lessons on what to do and not to do. We’re trying to learn those lessons the best we can.”

One of the last to give his thoughts on the subject was Mower County Sheriff Steve Sandvik. He spoke from the law enforcement side of things, including the amount of money spent on enforcing the drug laws that are still considered Schedule 1 offenses on a federal level, the most serious kind lumped in with heroin, LSD and ecstasy. In comparison, those drugs identified as Schedule 2 include methamphetamines and cocaine.

“If we go down this road, we need to address the public safety aspect,” he said. “We need to make sure we’re on that path together.”

Afterwards, Poppe acknowledged that more work needs to be done.

“I think we can all agree that more research needs to be done,” she said. “It’s not surprising that there are various views on the subject. Some think legalization needs to happen today, others want to take it slow. I didn’t hear absolutely never, ever though.”

“Maybe there is some more things we can do on the medicine side and educational side so all aspects can be addressed,” she added.