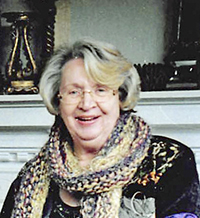 She was born March 16, 1937, in Albert Lea, the only child of Harlan “Huck” Bergerson and Marion K. (McAllister) Bergerson. She is preceded in death by her parents in 1981 and 1996, respectively.

Shirley grew up on the north side of Albert Lea, where she attended Northside Elementary School. She was a charter member of Grace Lutheran Church. As a teenager, she was active in the summer park programs, but she “lived” at the beach. She attended Albert Lea High School, graduating with the class of 1955. She entered Mankato State College to major in physical education with a minor in speech. During the college summer months, she served as an Albert Lea park recreation leader and lifeguard at the beach.

At Mankato State she was active in drama and swam with the synchronized swim team. She graduated with the class of 1959 with a Bachelor of Science degree, certification as a physical education teacher and was named in the 1959 edition of “Who’s Who in American Colleges and Universities.” After teaching physical education several years in Iowa and Minnesota, she was accepted as a teaching assistant in the physical education graduate program at the University of Southern California. In 1964, she received a Master of Science degree in physical education from USC. She returned to Minnesota, taught a year at Mankato State Lab School, returned to California to teach a year in Long Beach and then moved to San Francisco, where she was employed by the San Francisco United School District.

In 1980, after having taught 18 years at Herbert Hoover Junior High School in San Francisco, she spent a sabbatical year of study at California State University-Hayward, beginning a program of training as a speech pathologist. She was admitted to the University of San Francisco Graduate School, completed the training program in speech pathology and received a Master of Art in speech pathology and audiology in 1983. She was certified by the American Speech Language Hearing Association in 1985 and licensed as a speech pathologist by the state of California in 1986. Having worked 27 years as a junior high school physical education teacher, Shirley transferred to the elementary school special education division, where she taught a special day program for speech-delayed children until she retired in 1997.

In 1977, Shirley married Lawrence “Larry” Halling. She and Larry had been teaching colleagues for several years. They made their home in Brisbane,California, a small community just south of San Francisco, overlooking San Francisco Bay. In 2006, after residing in Brisbane for 29 years, Larry and Shirley moved to Larry’s family home in the Visitation Valley neighborhood of San Francisco.

Despite having resided in California most of her working career and early retirement, Shirley never lost touch with Albert Lea. She and Larry were annual summer visitors, residing in Shirley’s family home. In 2009 they decided it was time to leave California and move permanently to Albert Lea.

In retirement, Shirley was active in decorative painting, especially Rosemaling and Bauernmalerei, needlework and knitting. She was particularly interested in color, whether it was in the natural world, the decor of her surrounding or in her own creations. It was her source of true enjoyment. Larry was always supportive and encouraging, and willing to come along for the ride in many artistic adventures.

Arrangements are being entrusted to Bonnerup Funeral Service. There will be no services, per Shirley’s wishes.