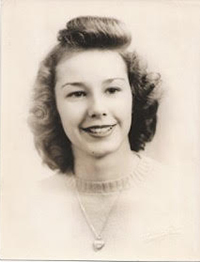 Shirley was born in Albert Lea on Aug. 27, 1925, the youngest of five siblings. She was nominated for Homecoming Queen at Albert Lea High School, but didn’t vote for herself because she thought her friend, Polly, should win. Shirley graduated from high school in 1943 and enjoyed working at the telephone company during World War II.

She married Air Force pilot John Hansen in 1946, and they had two daughters, Susan and Jane.

John reenlisted in the Air Force, and they were stationed in Texas, Germany, France, Arizona, Idaho and Minnesota. After John retired, Shirley and John moved back to Albert Lea and spent many winters in Tucson, Arizona, where they enjoyed golfing and reconnecting with old friends from their Air Force days. Shirley was especially close to her sister, Ginny, had many, many friends, was a loving grandmother to her three grandchildren, got a hole in one at Green Lea Golf Course, played bridge, was a member of First Lutheran Church, loved to travel, enjoyed her great-grandchildren and kept an exceptionally clean home. If you went to the grocery store with Shirley, you were pretty sure she was the most popular person in Albert Lea! Shirley was grateful for her wonderful life, and treasured her memories of living in Europe, travel, and time spent with family and friends.

A family remembrance will be held, and, if desired, donations may be made to the Salvation Army in Albert Lea.