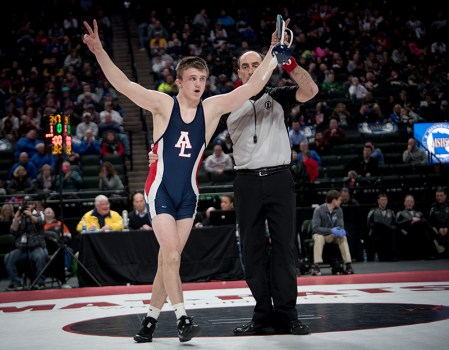 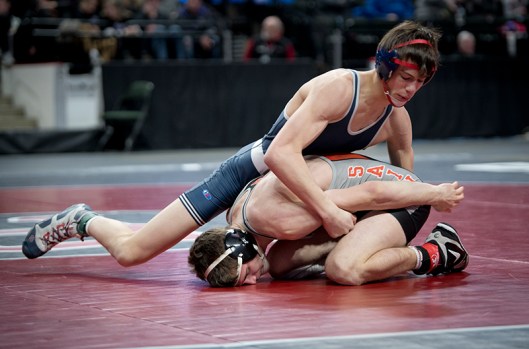 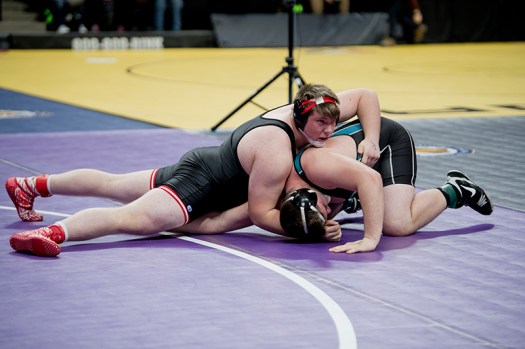 NRHEG’s Quinten Arndt wrestles ACGC’s Tanner Berghuis at 285 pounds in the opening round of the state wrestling tournament. Arndt lost his match, sending him to the consolation bracket. - Colleen Harrison/Albert Lea Tribune 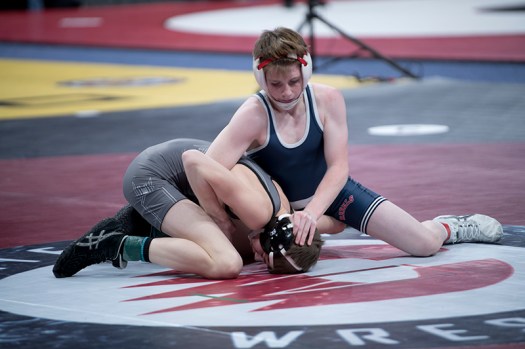 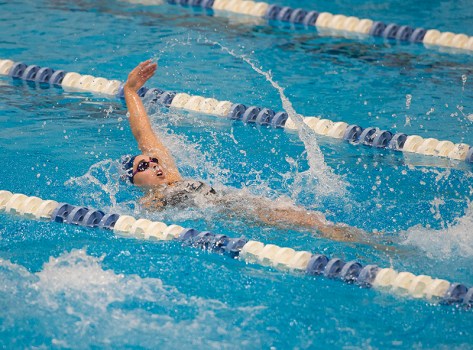 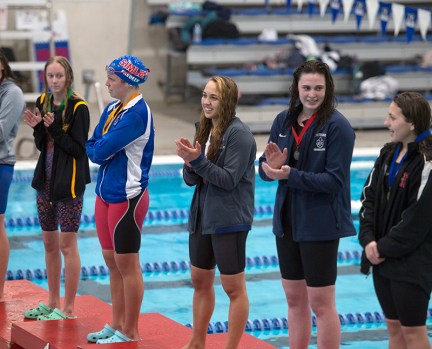 Koziolek stands on the podium after receiving her third-place medal for the 200-yard individual medley. - Tyler Julson/Albert Lea Tribune 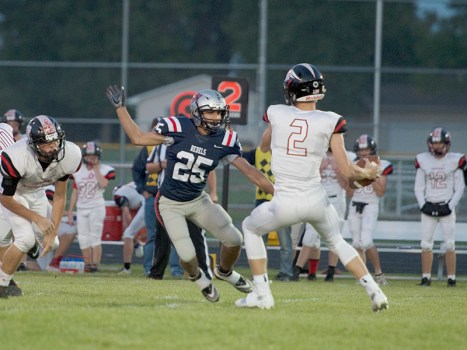 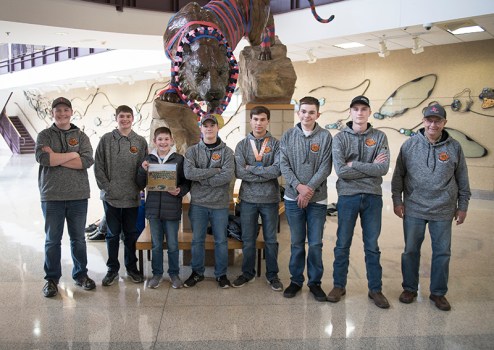 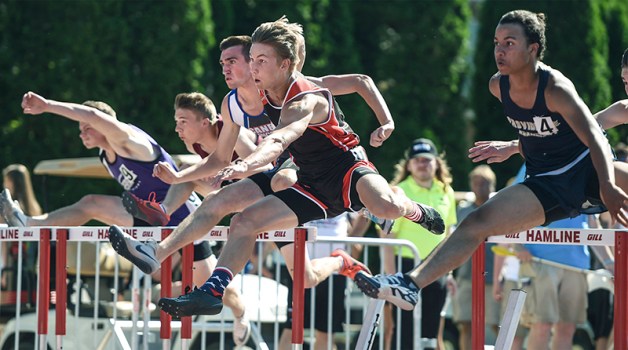 NRHEG’s Brady Agrimson races in the finals of the 110-meter high hurdles during the Minnesota Class A state track and field meet at Hamline University in St. Paul. - Eric Johnson/Albert Lea Tribune 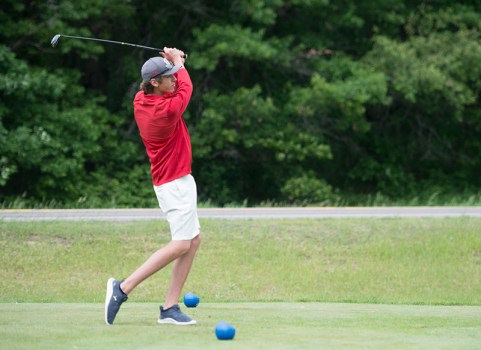 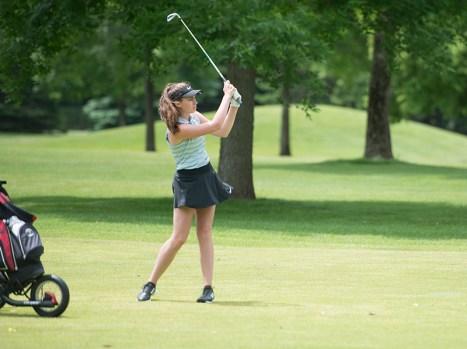 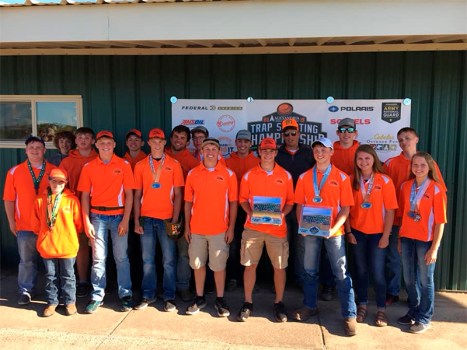 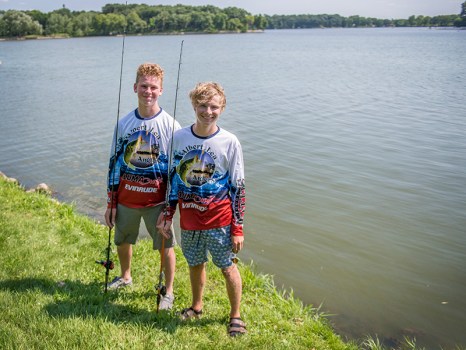 The sporting world gave us many memories in 2019 that are sure to stick with us for a long time.

Many national stories grabbed our attention —  from the feel-good stories, like the triumphant return of Tiger Woods and the U.S. women’s national soccer team, to the shocking and bad, such as Andrew Luck’s early retirement and the Astros’ cheating conspiracy.

In the state we saw the efforts of PJ Fleck and the University of Minnesota  football team finally pay off, as the Gophers went 10-2 overall, 7-2 in the Big 10 and earned an invite to the Outback Bowl. The Gophers volleyball team also impressed fans, making it to the Final Four of the national championship tournament.

The Twins won the American League Central after looking like it might be a rebuilding year before the start of the season. They also broke the single season record for home runs, or “bombas” as they came to be known, with 307.

While the Vikings did not win the division, it is evident that Kirk Cousins has proved his doubters wrong, leading them to a playoff spot in the 2019 season.

Joe Mauer and Lindsey Whalen’s jerseys were retired by their respective teams.

There is a long list of stories that grabbed headlines in the state throughout the year.

Our local news was no different. From a state champion to the passing of a local legend, let’s look back at the biggest stories from around the area in 2019.

After winning his first state title in 2018, Zach Glazier entered the 2019 season as the odds on favorite to be crowned champion again. There was only one obstacle in his path: Owatonna’s Cade King.

Glazier and King battled in tight matches throughout the season, meeting a total of five times, including the state championship match at 182 pounds. Glazier came out on top of King in all five of their bouts, including the narrow 1-0 decision victory in the championship.

“I’ve dominated everyone,” Glazier said moments after his victory. “I’ve scored a lot of points and (King) has slowed me down all year, but I beat a good kid five times and that’s something to be proud of.

“It’s been a great year. I have no regrets looking back on my career. I’ve worked hard and my wrestling showed that. It’s been fun.”

Glazier ended his year with a 47-0 record and has since graduated and now wrestles at one of the premier wrestling schools in the country, the University of Iowa.

While at Iowa, Glazier has already won a handful of tournaments while wrestling away from the Hawkeyes’ varsity lineup.

Albert Lea was not the only area school to see success at the 2019 state wrestling tournament.

Both United South Central and NRHEG sent two wrestlers to the Class A meet and saw nice results.

The highest finisher of the group was United South Central’s Blake Legred, who finished as runner up for the second consecutive year.

While it was a disappointing finish for the one-time state champion, he still ends his high school career as one of the most decorated athletes in school history.

He ended his senior season with a 41-5 record.

NRHEG seniors Quinten  Arndt and Tyler Jacobson also wrestled in the tournament — Jacobson at 170 pounds and Arndt at heavyweight.

It came as a shock to many in the community when they learned longtime Albert Lea teacher, coach and Tigers sports enthusiast Davis Gilbertson was ill and living at St. John’s Lutheran Community. After a short while battling cancer at St. John’s, much to the sorrow of the entire community, Gilbertson passed away.

Gilbertson undoubtedly touched the lives of nearly every person he came into contact with. Whether in a coaching, teaching or fan role, Gilbertson was a friend to many.

As a coach, Gilbertson had a hand in basketball, football and track. His real passion came in basketball. He could be found on the sidelines of nearly every Tigers home game right up to the year before his passing. He was also a mainstay at many baseball games as the game announcer for the high school team.

Gilbertson will live on in the memories of those he helped teach and inspire throughout his life.

As a junior, Albert Lea swimmer Jaeda Koziolek qualified for her fifth consecutive state meet. Usually accompanied by at least one teammate, Koziolek was the only Tiger to qualify this season.

She qualified in two events: the 200-yard individual medley and the 100-yard butterfly. Although Koziolek failed to qualify for either the championship or consolation final, qualifying for a state meet for five years in a row is quite the feat in itself.

Koziolek will surely be on the hunt for a sixth-consecutive qualification and possibly a spot in a championship final when her senior year begins in 2020.

The United South Central football program continued its reign of dominance through the 2019 season, finishing the regular season with an 8-0 record and winning two games in the playoffs before falling in the Section 2A championship.

The Rebels had a similar season in 2018, going 8-0 in the regular season and earning a spot in the state playoff tournament.

Some of the biggest reasons for the team’s success were the seniors. Isaac Meyer, Brevan Linder, Zach Neibuhr, AJ Kloos and Mark Bushlack, to name a few, were key factors in all of the achievements the Rebels attained.

The Albert Lea trap team hit the ground running in their first fall season and dominated their way to a conference championship.

Each weekend the team would travel to different locations and after week three, the team pulled ahead and never looked back.

The team set three goals at the start of the season: to be safe, learn about their firearms and have fun. They accomplished all of those en route to their debut season conference championship.

“After the first couple of weeks we were around second or third place in our conference,” said  Thomas Erickson, a junior on the team. “I could see it, but I didn’t believe it. My family can attest I was screaming when I found out. It was just the coolest feeling in the world being able to say it was our first year and we got first.”

Three area athletes represented their schools at the 2019 boys’ state track and field meet. Albert Lea junior Janyjor Ruei made the trip to compete in the AA high jump. Despite not making it out of the prelims, Ruei ended the Tigers drought in state meet participants and will surely make a run at a state bid again in the 2020 season.

NRHEG took two athletes to the meet in seniors Brady Agrimson and Jacob Schuller. Agrimson ran in the 110-meter high hurdles and came in third place in both the prelims and finals with times of 15.25 and 15.34 respectively.

Schuller competed in the Class A high jump and came in ninth place with a final jump of 6-02.

Alden-Conger and United South Central were also represented at a spring state meet, with each school sending a junior to the Class A meet in Becker.

Annika Riebe, Alden-Conger’s athlete finished her first day in 36th place and after a rough start to her second round, fell to 57th place and ended the tournament with a final score of 201 (+57).

The Rebel’s golfer, Blake Heggen, ended his first day in 40th place and used the seventh best score of the second round to move into 20th place overall. His two day total was 167 (+23).

It was a successful year for many area trap teams. The Alden-Conger trap team went to the national championship meet in Michigan in early July and came away with a third-place trophy.

“It’s crazy coming from a small school,” said Ryan Hansen, a senior on the team. “We’re not always a very athletic school, but the other stuff we do, like trap shooting, supermileage and robotics, we excel at. It’s just super fun.”

Many of the trap team participants for Alden-Conger had been shooting together since they were in sixth grade, and that chemistry showed in the national championship.

“This has been a great group of kids to work with,” Koenen said. “From the time they stepped to the line to the time they finished, they were so in sync. They knew what everyone else was going to do and it became automatic for them. You could tell they were in the groove and they weren’t thinking about all the extra stuff. They were doing exactly what they needed to be doing. It’s been the most fun I’ve had watching a squad was the groups we took to nationals.”

Six members of Albert Lea’s high school fishing group earned themselves a spot in the 2020 High School Fishing National Championship in meets throughout the year in 2019.

The first anglers to claim their sport were Griffin Thompson and Thomas Lundell. The duo came in fourth place at a tournament with a five-fish weigh-in of 14 pounds, 11 ounces.

Caden Stevens, Will Utpadel, Ian Lathan and Jaeger Larson got their chance about a month later at a tournament in Red Wing. Stevens and Utpadel won the tournament out right with a combined weight of 17 pounds, 15 ounces, more than four pounds heavier than the second-place team.

Latham and Larson came in fourth place with a weight total of 13 pounds, 6 ounces, earning a national championship bid by just 3 ounces.

The national championship is slated for summer 2020 in La Crosse, Wisconsin.