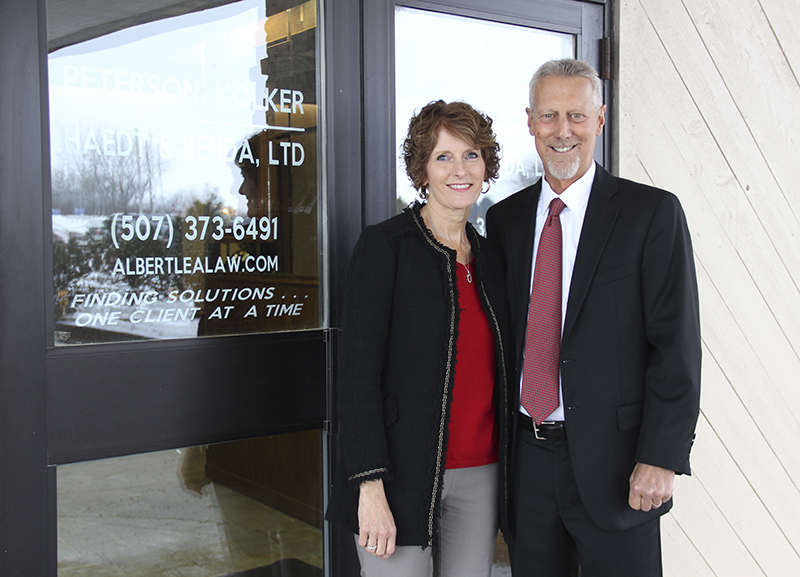 Doug and Jill Peterson are retiring this month as an attorney and paralegal from Peterson, Kolker, Haedt & Benda. - Sarah Stultz/Albert Lea Tribune

A longtime Albert Lea attorney is retiring this month after 35 years in the profession.

Doug Peterson of Peterson, Kolker, Haedt & Benda is a third-generation Albert Lea attorney, who started in 1984 at the firm that was originated by his grandfather Elmer Peterson.

Doug Peterson was joined by friends and family on Friday to celebrate his retirement, and the retirement of his wife, Jill Peterson, who worked for about 30 years at the firm as a paralegal, at the former Elks Lodge in southern Albert Lea. The building was purchased by other attorneys at the firm and is expected to reopen after renovations in the summer of 2020.

Doug Peterson said his favorite part over his years as an attorney has been getting to know his clients. He has worked with the children and grandchildren of the people his father and grandfather worked with.

He said when he first started, he took on a little bit of everything. Over the next five or 10 years, he narrowed down his focus and began working more with estate planning, probate and trust administration.

In the community, he served in leadership of several organizations, including the board of directors for the Albert Lea-Freeborn County Chamber of Commerce, the St. John’s Lutheran Community Foundation board of trustees and as a volunteer attorney for Southern Minnesota Legal Services, among others.

“The firm is where it is because of his leadership,” said attorney Matt Benda, who described Doug Peterson as his mentor. The two men have worked together for 25 years.

Joe Johnston, a retired Edward Jones financial advisor, said he and Doug Peterson had many of the same clients over the years, and Doug Peterson helped many set up endowments, which will allow their charitable gift to continue giving forever.

“When a client brought up to them that they were interested in doing something charity-wise, he would talk about endowments,” Johnston said. “That really magnifies the gift.”

If the client wanted to keep their donations local, he wouldn’t hesitate to bring up the Freeborn County Communities Foundation, Johnston said.

He said both Doug and Jill Peterson had a large impact on the foundation. Jill Peterson served on the board for 12 years, including four years as chairwoman.

Doug Peterson said he will continue working through the end of the year and then will be available as a resource to the lawyers at the firm as requested. His wife will likely still help as requested, too.

He thanked his clients and co-workers for his years at the firm.

Attorney Stephanie Haedt described Peterson as a mentor for all of the others at the firm.

Peterson anticipated traveling, learning Spanish and staying active in the community upon his retirement.