An Albert Lea man is facing charges for allegedly lighting a stolen vehicle on fire in a field south of Albert Lea last month. 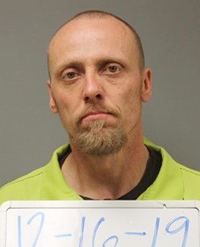 Christopher Darwin Busall, 41, was slated for a hearing on a charge of second-degree arson on Thursday but did not come to the hearing, according to online court records. A new hearing has been slated for Jan. 16.

The charges came after the Freeborn County Sheriff’s Office responded to a call for assistance regarding a vehicle that was found fully engulfed in fire at about 11:30 a.m. Dec. 16 in the middle of a field near 745th Avenue and 180th Street south of Albert Lea.

While en route to the fire scene, a detective saw a northbound red pickup pull to the side of the road and drag a vehicle axle assembly out of the middle of the roadway.

When the detective arrived at the scene of the fire, the vehicle was still smoldering, though all that remained of it was a shell. There were no doors, hood, truck lid, engine, bumpers or vehicle identification number.

The detective reportedly saw marks in the snow that belonged to a vehicle that had been used to tow the destroyed vehicle to the area. There were drag marks in the snow southbound from 180th Street through the field to the vehicle, and there was yellow discoloration in the snow, which was determined to be from gasoline. Footprints were also found.

A deputy determined that the red pickup had nearly been involved in an accident with a blue Dodge pickup that had been towing the axle when it came loose. The blue Dodge had almost immediately turned into the nearest yard off of 750th Avenue. At that yard, the detective found a car hood and trunk lid that were later determined to fit the body of the burned vehicle and found to have Mitsubishi labeling. There were also boot and tire impressions there that matched those at the scene of the burned vehicle.

Reports stated a deputy identified the driver of the blue Dodge as Busall. He was arrested on the roadway adjacent to the address and was found to be wearing boots that matched the prints at the scene.

The owner of the land where the car was burned reported the fire and had not given permission to burn on his land.

After conducting a search warrant at Busall’s home on Madison Avenue, the detective found four doors, five tires and rims and a steering wheel, all with a Mitsubishi logo.

The State Fire Marshal’s Office investigation revealed the presence of gasoline on the floorboards and concluded the fire was intentionally set.

A search of the blue Dodge found two gas cans with a gas-soaked rag and a long chain suitable for dragging the burned vehicle to the location where it was found. Busall was also in possession of a lighter when he was arrested.

Upon further investigation, the car was able to be identified and was found to have been stolen in July 2014 in Florida, according to court records.