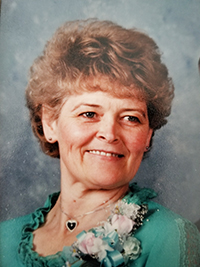 Carol was born in Austin on Feb. 27, 1941, to Frank and Edna (Olsen) Mudra. She was baptized and confirmed in Bethlehem Lutheran Church. She grew up in Myrtle and graduated from Glenville High School in 1959.

She married Dale Oakland in October 1960; they later divorced. Their marriage was blessed with three sons: Raughn, Darin and Scott. In 1970 they moved to Brownsdale. She was a member of Brownsdale United Methodist Church and taught Sunday school several years in the “old” church.

Carol worked many years at Drapery Services in Austin. She enjoyed sewing. She began making her own clothes at the age of 6 on her mother’s treadle sewing machine. Carol also enjoyed crocheting, family fishing trips, playing huckleybuck and hearts, and spending time with her grandchildren. She enjoyed baking sweet treats for her family, known for her delicious apple bars and the richest chocolate bars known to mankind! She loved watching the Minnesota Twins, play even though she fell asleep during Game 7 of the Twins/Braves World Series!

She is preceded in death by her parents; son, Darin; and brothers Dale and Wayne.

A memorial service will be at 3 p.m. Friday at Brownsdale United Methodist Church at with visitation one hour prior to the service. Interment will be at a later date.