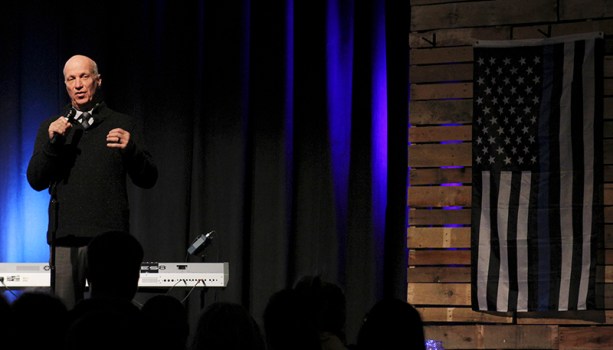 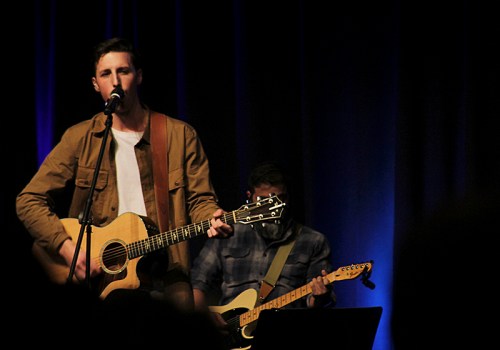 Musicians and singers with Hope Church sing a song of worship Thursday night during the community night of prayer. - Sarah Stultz/Albert Lea Tribune 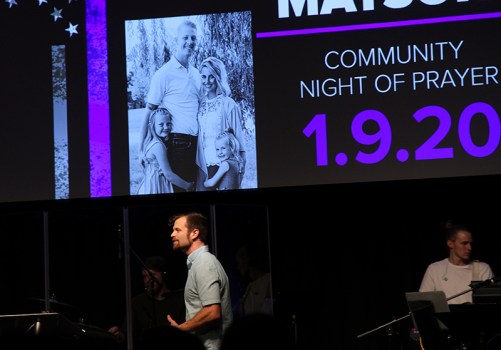 Pictures of Waseca Officer Arik Matson and his family were shown on a large screen at the church prior to the start of the community night of prayer and periodically throughout the event at the church as Kaleb Hurley, pastor of Hope Church, and others spoke and prayed. - Sarah Stultz/Albert Lea Tribune 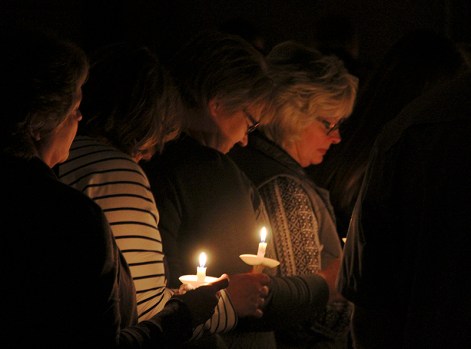 People in attendance at the community night of prayer gather in small groups Thursday to pray while holding candles. - Sarah Stultz/Albert Lea Tribune 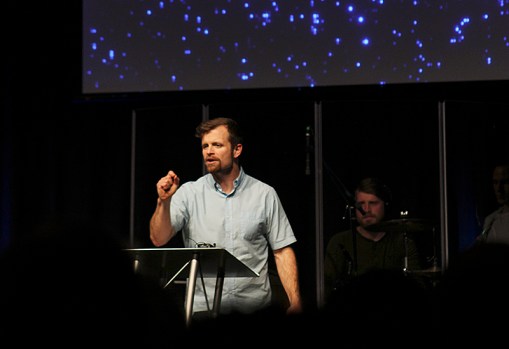 Kaley Hurley, pastor at Hope Church, speaks during the community night of prayer held for the community to pray for Waseca Officer Arik Matson, who was shot Monday while on duty. - Sarah Stultz/Albert Lea Tribune

Drawing on their faith, several hundred area residents came together Thursday night to pray for healing for the Waseca police officer shot Monday night while responding to a call with three other officers.

Officer Arik Matson of Freeborn remains hospitalized at North Memorial Health Hospital in Robbinsdale “in a stable state,” said Kaleb Hurley, pastor of Hope Church, where Matson is a parishioner. 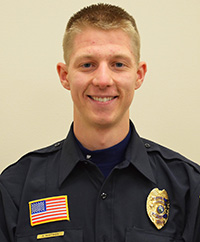 Hurley, who led the community night of prayer at Crossroads Church, said doctors continue to move forward with a plan for Matson’s care. He said it was time for people to “fervently ask God to intervene in Arik’s recovery.”

“We can believe and depend on him,” Hurley said.

He also was involved in numerous efforts in the city of Freeborn, including as a volunteer firefighter and member of the city council.

In addition to asking for healing for Matson, Hurley and others prayed for law enforcement officers and thanked them, several of whom were in the room in uniform, for their commitment and for protecting the community when safety is jeopardized for others.

“In a unique way, you show the love of God in those moments,” Hurley said.

The Rev. John Mitchem of United Methodist Church, who is chaplain for the Albert Lea Police Department and Freeborn County Sheriff’s Office, said law enforcement officers care for people at their worst moments in life. He asked for protection over them and their families.

Waseca Mayor Roy Srp said he has known Matson since before he became an officer in Waseca, and he has no doubt that Matson and his family are being watched over.

He spoke of the Apostle Paul from the Bible and the virtues of faith, hope and love and said that love is what is being expressed for Matson from the community. He said he has been changed by the support he saw in the waiting room after Matson’s surgery and in the various communities in the aftermath of the shooting.

Hurley also asked those in attendance to pray for those in the community who he said need Jesus Christ the most: the people who are committing crimes in the community, including Matson’s alleged shooter Tyler Janovsky.

“While we hate the fact that there are people in society who are making things unsafe for our children and our loved ones … the reality is this: They need Jesus,” he said. “They need a breakthrough. They need their heart to be changed by the grace and the mercy of Jesus.”

“I stand before you a changed man today, no more breaking crimes, no more doing those things,” Hurley said. “Why? Because of the grace and the power of Jesus and the willingness for people to pray for me that God would shine his light on my darkness and make me new.”

People in attendance at one point during the service lit and held candles as they prayed in smaller groups in the sanctuary. The church was filled to standing room only.

At the end of the event, Matson’s wife, Megan, thanked everyone who has shown support for her family, whether it be small businesses raising money, police officers who are watching her house or protecting the hospital, or friends and family.

“Everything you’ve done does not go unnoticed,” she said.

Hurley encouraged people to continue supporting the Matson family into the future financially during Matson’s recovery.