A memorial service for Edward “Eddie” Stevens will be at 12:30 p.m. Monday at Bonnerup Funeral Service. Burial will follow at Hillcrest Cemetery. 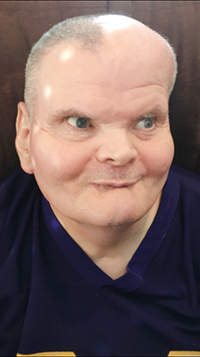 Edward John Stevens was born Feb. 25, 1955, to parents Malcolm and Carroll (Fleming) Stevens. Eddie was born with mental disabilities and was raised by his maternal grandparents. In 1984, Eddie became a resident at REM-Woodvale in Albert Lea, where he would continue to live the rest of his life.

Eddie worked at Cedar Valley Services — shredding paper was a favorite job of his!

Eddie enjoyed the little things in life. In his early years, he could be described as quite feisty! Later in life, Eddie became much calmer, and it was then that he gained close bonds with many of the caregivers at REM. Eddie enjoyed his 5 a.m. coffee, watching the Food Network on TV or looking at the food ads in the Freeborn County Shopper. He loved watching “SpongeBob SquarePants” with the staff at REM, and always perked up when they would play outside or go for van rides. He liked to laugh, either when the caregivers would do something funny or when Eddie would be teasingly misbehaving! A light in Eddie’s eyes would sparkle when he laughed, and his smile could light up a room.

He will be missed by his roommates for over 30 years: Shawn Reak and Ed Tweed; his current roommate, Carol King; and all of the loving caregivers and friends at REM-Woodvale in Albert Lea.

He was preceded in death by both parents, Malcom and Carroll; and a brother, Gerald.

“People with disabilities lead lives just like everyone else — they laugh, they cry, they love, they dream — just like you!”