Enthusiastic early voters camp out, rally for their presidential picks 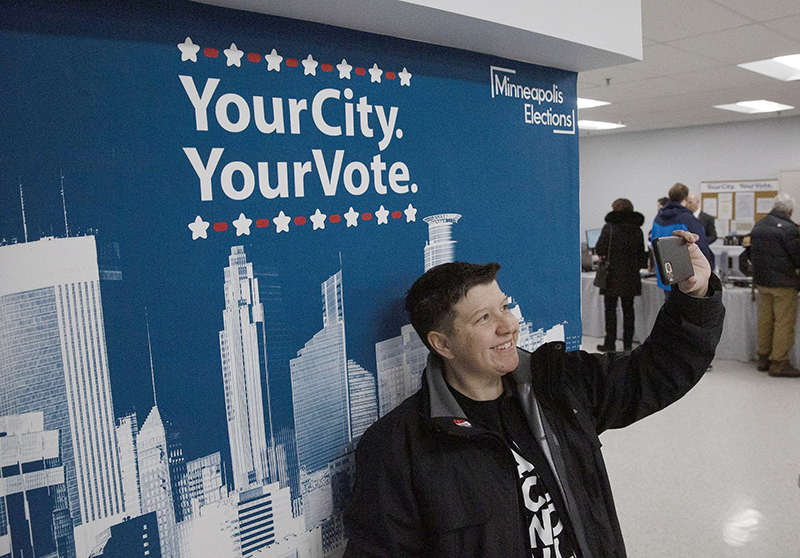 Davis Senseman takes a selfie after casting a ballot Friday at Minneapolis’ early voting center on the first day of early voting in the presidential primary. Senseman was the first in line to vote at the center on Hennepin Avenue. - Christine T. Nguyen/MPR News

Red “I Voted” stickers popped up across Minnesota again on Friday, as early voting kicked off for the state’s first presidential primary since 1992.

Outside of polling locations, presidential campaigns and their supporters held rallies, took selfies and otherwise ushered in the 2020 election. Some voters in Minneapolis even camped out in an RV overnight to be the first in line to cast their ballots.

“I have backup options available but I want to go with my first gut instinct until that happens,” said Duluth voter Ashlie Castaldo, who cast her early ballot for Minnesota Sen. Amy Klobuchar.

“She’s pragmatic but has a sense of vision,” Castaldo said, adding that if Klobuchar exits the race, she would take just about any Democrat as the nominee to face President Donald Trump in the fall.

The votes won’t be counted until the March 3 presidential primary, and voters can go back and change their votes up to a week before that date.

With temperatures hovering around zero degrees, Minneapolis resident Davis Senseman and a handful of friends bundled up in a rented RV Thursday night. They parked the camper outside a local polling spot, hoping to be among the first in the nation to cast ballots in the primary.

“I think she’s building a hugely broad coalition,” Senseman said. “This is an RV full of Warren supporters.”

The only hitch in the RV plan, Senseman said, came around 1 a.m., when a security guard for a nearby property asked them to clear off the site. So, they shuffled the RV across the street, only to start it back up before sunrise and return to their original post. They were first in line to vote.

It isn’t clear how many Minnesotans will participate in early voting for the presidential primary, but the city of Minneapolis opened a new early voting center this week to accommodate them.

“We anticipate at the high end (turnout) could be 40-50%. However we’re prepared for higher,” said Grace Wachlarowicz, Minneapolis elections director.

She said officials are prepared to help early voters who want to change their vote before Feb. 25 — if they have a change of heart or their candidate drops out of the race.

“When a person requests their ballot to be spoiled or clawed back, it’s all documented. We have it all organized so that it can be easily found, documented that it was spoiled, invalidated, and a new ballot issued,” Wachlarowicz said.

Voters in the presidential primary must declare a party affiliation. That information will be shared with the state’s major political parties.

People who came out on the first day were a mix of the devoted and those who wanted to avoid the crowds on March 3.

Varick Olson and his wife, Louise Fawcett, zipped up their coats and were on their way just minutes after their Ramsey County polling place had opened. The Roseville couple voted early because of a planned trip to Arizona.

Both voted for Michael Bloomberg, the businessman and former New York mayor who has been blasting the airwaves with TV ads.

“The other people are too much in the realm of being ‘Old Washington’ and so consequently they’ll be fodder for the present situation that we have,” Olson said.

“I also think Mr. Bloomberg has shown his ability to lead and create change at the very, very top. All of the others have been in legislative bodies,” Fawcett added.

Some of the other 15 candidates on the Democratic ballot have held executive roles. But most have spent big parts of their political careers in Congress.

Republicans have just one named option on their ballot: President Trump. If that’s not who they want, they can write in an alternative. But most of the voters in Minnesota’s primary will likely be Democrats because of the competitive field.

“Well, I was kind of nervous because I wasn’t quite sure in my choice. But it was kind of liberating just to be able to choose who I want to be the next president,” she said.

Scharpf voted for Klobuchar after determining the senator’s views most matched her own.

Another kind of first was recognized at the South St. Paul City Hall, where people can go for an early ballot.

One hundred years ago, women achieved the right to vote following ratification of the 19th Amendment. The day after women nationwide got the franchise, South St. Paul held a water utility bond referendum — and women lined up to vote. It’s believed to be a national first.

“Especially as I’m marking the anniversary of women being able to vote, to actually be able to vote for a woman for president, I think it’s exciting,” said Gaylord, who backed Klobuchar.

Gaylord and Mayor James Francis posed for photos by a 1904 wooden ballot box after completing their 2020 presidential primary ballots. There will be more events throughout the year to celebrate the women’s suffrage centennial.

As for the presidential race, the primary on March 3 and the general election on Nov. 3 are the two chances for the broader Minnesota electorate to weigh in.