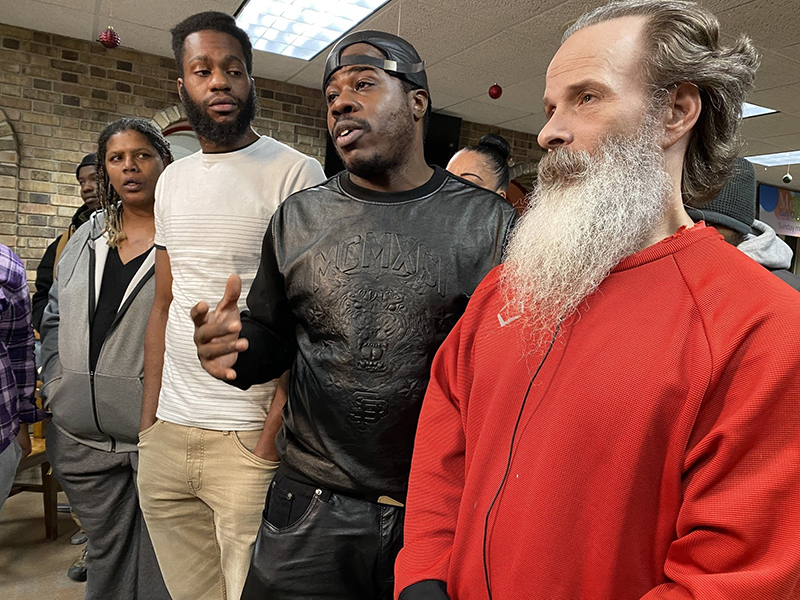 The Minneapolis Foundation says as of Monday afternoon $390,000 in contributions have been raised for survivors of the Francis Drake Hotel fire. However, some of those survivors say relief is slow in coming and is not being equally shared.

More than 200 residents were forced to flee the Minneapolis hotel which burned on Christmas Day. Hennepin County officials say about 30 families with children were placed at the Drake because there wasn’t room at other family homeless shelters. After the fire, the county relocated them to a hotel in Bloomington.

Another 60 to 70 adults, who were paying rent at the Drake are now staying at First Covenant Church in downtown Minneapolis. Some survivors have complained that even though the Red Cross and church staff have been friendly and helpful, the conditions are not ideal. They have to sign up to take a shower and there aren’t enough washers and dryers to accommodate everyone.

Former Drake Hotel resident Ron Tolbert said he’s glad single mothers and children are getting help. But he said the relief is not being distributed equally.

“If we are upset with anyone, it’s the people who’s in control — not those young children and those young ladies out there who need just as much help and services as we do,” he said.

According to the Minneapolis Foundation, $10,000 in Target gift cards were distributed to some of the survivors; $40,000 is going to First Covenant Church to help it handle the additional guests for the next two to three weeks; and another $25,000 has gone to the Salvation Army’s Harbor Lights shelter which provided food and emergency supplies for survivors.

In a statement, Foundation senior vice president Chanda Smith Baker said her organization is “working hard to address the immediate and the long-term needs of the individuals impacted by the fire.”

More resources will be distributed in the coming days and weeks, including $8,000 in cash and Target gift cards to each of those sheltered at Covenant Church on Monday, Smith Baker told MPR News.

Former Drake resident Jeffery Jones said he and the others were living independently until the fire. Jones said the money being raised should help him and other survivors get stable again.

“I would like to see the money coming directly to us. Not to state agencies, because people are making it impossible for us,” said Jones. “They think we’re not able to control our own money. And we are.”

Some residents say they’re going to need a lot of help to get back on their feet.

Tonieh Richards lived at the Drake with her three adult sons. One of them, she said, has autism and needs a lot of supervision. Richards is his designated caregiver.

One of the hardest parts of being displaced from the hotel, Richards said, is that her autistic son no longer has his Nintendo Switch video game. She said the game meant a lot to him and his brothers.

“I have to lie and promise him, ‘I am going to buy it back.’ And that’s the only thing that makes them relaxed,” said Richards. “So they don’t feel angry.”