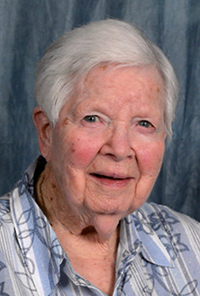 Gwendolyn Carvel Olson was born March 11, 1927, in Freeborn County to Gilford and Virginia (Miller) Olson. She attended school in Freeborn and graduated in 1945.

On Jan. 9, 1945, Gwen was united in marriage to John Christensen at her parents’ home. To this union three children were born. After graduation and her marriage to John, Gwen moved to Chicago and worked in a defense plant while John served his country in the Navy during World War II. Upon John’s discharge, the couple moved to Hartland and in 1959 they moved to Blooming Prairie, where John worked for Lysne Construction and Gwen worked while in Blooming Prairie at Blooming Prairie Public Schools and Continental Phone Co.

She loved dancing and playing cards, especially bridge  — she belonged to several bridge clubs. Gwen enjoyed golfing, hardanger, traveling, making lefsa and was an avid reader — she liked to read the Bible. She especially loved spending time with her family and had fond memories of her childhood-like tobogganing down “potato hill.”

She was preceded in death by her parents Gilford and Virginia Olson; husband, John Christensen, in 2004; sons-in-law Philip Milton and Lee Folkens; and brothers Leslie (Dolores) Olson and Stanley Olson in childhood.