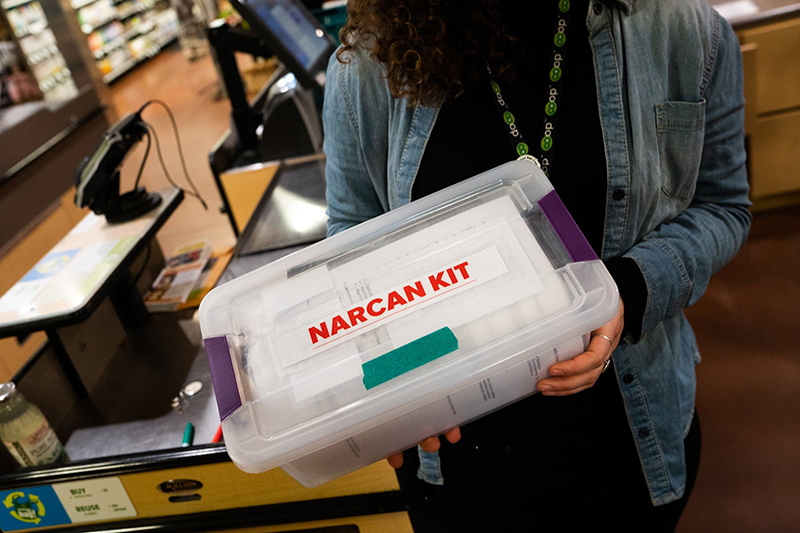 Hannah Maertz, facilities manager for the Seward Community Co-op, holds a Narcan kit Jan. 2 that is kept behind the front desk in case of an overdose at the store in Minneapolis. - Evan Frost/MPR News

On a January morning in Minneapolis two years ago, security officers at the Franklin Library noticed that a man had been in a bathroom stall for an unusually long time. They asked if he was OK. He didn’t respond. When they forced open the stall door, he wasn’t moving.

“We didn’t know it was an overdose at that point,” security officer Julian Teehan said. “He wasn’t breathing. He didn’t have a pulse.”

The security officers radioed an ambulance, started chest compressions and performed rescue breathing. Paramedics arrived and loaded the man into an ambulance. He was pronounced dead at the hospital.

The 31-year-old man died of an opioid overdose — one of 163 overdose deaths in Hennepin County that year.

The experience spurred Hennepin County officials to reassess what they could do as the opioid epidemic continued to claim tens of thousands of lives each year across the country. The county has since implemented a policy explaining how best to treat overdoses.

They have also started training 60 county officers and 80 contract security officers on how to administer naloxone, also known by the brand name Narcan — a medication that can reverse an opioid overdose.

“It’s not just libraries, (it’s) everywhere. (Security officers)interact with the residents, and they get to know them and they want to have more tools to help them,” said Liudmila Trandafilava, who manages staff and contract security for Hennepin County.

First, they had to be trained to identify the signs of an overdose.

“It could be a slow respiration, slow pulse, bluish lips, pinpoint pupils,” Trandafilava said. “They usually can recognize it right away based on the sound the individual makes.”

Trandafilava said they’ve been rolling out the policy throughout county buildings. And there are signs it’s making a difference: Last year, security officers revived at least 11 people who overdosed on county property.

Teehan, the security guard at Franklin Library, put the new training to use almost right away. A librarian flagged him down in October 2018. A man outside was not moving.

“I get up to him, ‘Hey, are you OK?’ Tapped on the shoulder. No response,” Teehan said. “I notice his lips are blue. I check his eyes and they’re pinpoint pupils. At that point, I’m kind of thinking this is most likely an overdose.”

Teehan’s colleague performed chest compressions as Teehan prepped the naloxone he’d recently learned how to use. He sprayed the medication up the man’s nose.

“I think maybe 30 seconds had gone by, and then he started to gag, started to breathe again,” Teehan said. “As I was trying to attempt to locate a pulse, he kind of went off and went under again.”

The officers continued rescue breathing and chest compressions. When the man’s pulse still didn’t come back, Teehan gave him another dose of naloxone. He started breathing a minute later. Emergency responders arrived and loaded the man into the ambulance just as his eyes opened, Teehan said.

“It’s a scary thing, to see him go from not breathing into opening eyes,” Teehan said. “(It was a) very good feeling.”

It’s not just local governments that are shifting their policies and strategies to try to prevent fatal overdoses on their properties. At the Seward Community Co-op, a mile down Franklin Avenue from the library, employees began to notice signs of injection drug use in the private, locked bathrooms, including used syringes, said Hannah Maertz, facilities manager for the co-op.

Maertz said it’s an obvious danger for employees or customers to be around used needles. But they also wanted to take as many precautions as possible for the people using the drugs.

“They’re also members of our community,” Maertz said. “And (we were) wanting to make sure that they have resources available to them to get help or just make sure they’re as safe as possible while they’re in the throes of of their disease.”

In addition to creating a policy on how to treat overdoses, stocking naloxone and teaching dozens of employees and members of the public how to use it, the Seward Co-op is taking some more simple steps.

They’ve tried to keep a closer eye on the bathrooms. Maertz said some people were staying there for up to an hour. Now, cashiers or people working the front desk are trained to check on them after about 10 minutes. The co-op has also taken the unusual step of shaving off the bottoms of the bathroom doors.

“We just did a quarter of an inch, just so that if we’re afraid that someone is overdosed, before we go in and unlock the door, we can just peer down and see,” Maertz said.

They’ve also put up informational posters in the bathrooms about clean syringes, HIV and hepatitis C testing, drug treatment and how to get naloxone. The top of the poster says, “Your life matters,” in big, bold text. The bottom of the poster says, “Drug use is prohibited on Seward Co-op property.”

“This isn’t going anywhere, and this is just the world we kind of live in now, whether it’s here at our grocery store or if it’s elsewhere,” Maertz said. “If they’re going to do it here, then we want to make sure that we have all of our staff trained, and that we’re also being forthright with our other customers on what our community is experiencing.”

While many law enforcement officers already carry naloxone, advocates say it makes sense for libraries, grocery stores and other public places to be ready to respond to overdoses, which have become more common.

“It’s your neighbor or your grandma or your best friend or your sister’s boyfriend. … It’s everybody,” said Anne Pylkas, a board member of the Steve Rummler HOPE Network and medical director of Sage Prairie, a substance abuse clinic and treatment center.

The man who overdosed outside Franklin Library came back a few weeks later to see Julian Teehan, the security guard who saved him.

“He came up to me and said, ‘You know, I just want to say thank you. That was an eye opening experience. I haven’t touched any drugs or anything since that point and I’m actually thinking of going into treatment,’” Teehan said. “To have him come back and see him in a much better state, that was very good.”

Teehan now wears a bright white pin on his uniform that the county gave him for saving a life. He’s helped save the lives of three people since the county program on overdoses started.