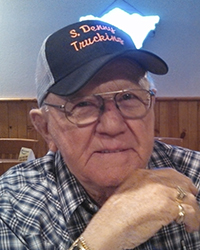 He was loved and will be dearly missed by many.

He married Helen Joan Sorenson on May 2, 1959, in Albert Lea. Jerome was later united in marriage to Pamela K. Kinnamon on April 11, 1987, in Coon Rapids.

Jerome grew up on the family farm where he developed a love for the outdoors, hard work and John Deere tractors. As an adult he worked as a salesman at North Central Public Service/Minnegasco, where he retired young in 1993.  He later moved to Arizona, where he drove off-road truck. He was a member of Trinity Lutheran Church in North Branch. He loved collecting shot glasses, cooking, reading westerns, listening to country, driving and spending time with family. He was a very devoted husband and took care of both Helen and Pam, who were struck early in their lives with illness.