Joy Lorraine Means was born Christmas Eve, Dec. 24, 1928, in Albert Lea, the fourth daughter of Stella and Henry Means. (Growing up in the Depression meant maintaining gardens in various places to feed a family of nine — and only one bike for seven kids!) Joy attended schools in Albert Lea. 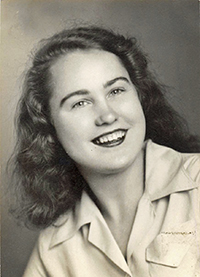 Joy met Byrine “Bye” Christian in Emmons and they were married May 2, 1948. Their children are Amy Dodd and Greg Christian, who were raised in the house built by Bye and his father, Melvin Christian. It was the first house built on Burr Oak Drive. Neighbors quickly became family on that street.

A lifelong member of First Lutheran Church, Joy taught Sunday School in the 1950s, volunteered in the office and was hired as an executive secretary, where she retired at the age of 65. This was too early, so she soon went to work as a secretary at Albert Lea Treatment Center, meeting many new friends.

She was an active member of FLC — a charter member of her circle. She loved music and theater, and attended every play and music production of Albert Lea High School and Marion Ross Performing Arts Center. She was an active volunteer for the American Cancer Society of Minnesota, the Audubon Society, a poll sitter during elections and loved her three bridge clubs, bowling league and book club until her stroke in 2008. 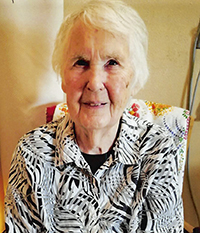 She and Bye traveled two to three times every year to visit Amy and Greg and their families in Montana and enjoyed many trips with friends. Joy became a resident of St. John’s Lutheran Community in 2014 where she was treated with love and respect by the fine staff, and lately by St. Croix Hospice.

She is survived by her brother, Frank Means; daughter, Amy (Daryl) Dodd, and their children Sarah Moreni, Heidi Heaphy and Lindsay Bartholomew and their families; son, Greg (Michelle) Christian, and their children Jesse Christian, Amy Gruber, Niki Hamlin and Mary Jo Johnston and their families; and numerous nieces and nephews, with very special thanks to nieces Rosalie Rolands and Judy Christensen for their loving care and attention.

Joy was preceded in death by her husband, Bye; and her siblings Beverly Boone, Mildred Wolff, Donna Estebo, Phyllis Philips and Dean Means.

Memorial services will be at 11 a.m. Thursday at First Lutheran Church in Albert Lea with the Rev. John Holt officiating. Visitation will take place one hour prior to the service at the church. Memorials are suggested to St. John’s Lutheran Community of Albert Lea or the memorial of the donor’s choice.